Is my favorite thing to do. Aside from my love of breathing and eating chocolate, Sunday sex is probably one of the most consistent and honest desires I’ve had in my adult life. So on this Super Bowl Sunday I am happier than usual to come upon Greedmont Park’s blog and find and advert for Mach 5’s “Sex On A Sunday” LP. Immediate download. Listen to sampler here. 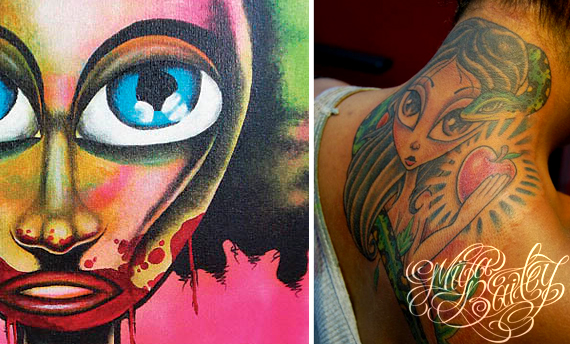 It’s amazing the people and circumstances one encounters just by saying “Hi.”

Sitting at a small table in DC waiting for him to finish up a conversation with his wife, I reflected on how I got access to one of the most successful tattoo artist in America. Unexpectedly, it all started with a random chat discussion I started with DJ GalaxyGlenn about Santigold, Kudu and yakuza tattoos. Next, I have the number for Miya Bailey—tattoo artist, co-owner of City of Ink (Atlanta, GA) whose tattoo tours take him across the states and overseas year round. And one of the most genuine and awesome talents I met in 2009.

Admittedly before the interview I was apprehensive. As a former resident of Atlanta, I’m all too familiar with the cookie-cutter personalities and unearned self-importance invading the ATL-iens. With the come-celebrity of Miami Ink, Kat Von Dee and the like I wasn’t sure what to expect. But even after working a 14-hour day Miya Bailey spared three hours to talk with me and at the end of it invited me to share some ‘home-grown’ with him.

Miya Bailey, raised in Asheville, NC, who used to be a self-described “misdemeanor king”—going from being a jack-boy, running a track of women, wearing the bow tie and selling bean pies for the Nation of Islam, hustling as a ‘scratcher’ to flowing his life into a success story—is now running one of the hottest tattoo shops in the nation and whose artwork is sought after from musicians to civilians to corporate L7’s. But despite being sick with the ink and pen, Bailey’s spirit shines brighter. With all his awesome talent, southern ATL drawl, and relaxed style Bailey is an acutely focused talent and fierce businessman with dreams far beyond the tattoo shop. His real dream is to tattoo for free, publish his book of illustrations and stories, Before I’m Gone: The Art & Life of Miya Bailey, and produce his documentary on black tattoo artists in America.

Though he often writes about his life  and art on his blog, Miya sat down to share his life as a tattoo artist from scratch to flow:

Washington, DC’s Pinz-n-Needles brought you up here.
Yeah they are a sister shop to City of Ink. I come up here every few months. I do two tattoos a day. That’s a full 12-hour day at least. So usually when I’m here I take one new client and one regular to balance it out. I talk to each person on the phone. Feel them out. Then determine if I want to tattoo them.

What is your life like as a tattoo artist? 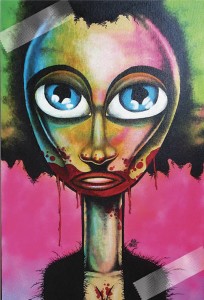 It’s a vampire life. That’s what a tattoo artist life is like. You don’t have a daytime life. I been tattooing for 16 years. I don’t know anything about the day.

How do you work with your clients?
If somebody fly in and they got like a couple of thousand and they want to try to knock it out, well then I’m going to put in the work. If somebody on a working budget it’s best to do it in sessions—$500 each session. You can break it down until you finish. I like to do it in sessions better than trying to do it all at one time, because you kind of have to dumb down the art and you have to try to cover as much work as possible. I’d rather do quality pieces in each session instead of a whole bunch of big work.  I like to listen to jazz, take my time. Take a few breaks to smoke my blunt, eat and get back to work.

What’s the difference between a tattooist and a tattoo artist?
In the tattoo industry there are three different types of people: there are scratchers, tattoo artist and tattooist. Now a tattooist, that’s like a person goes in a tattoo shop and says “I like that flower” or “I like that butterfly” you pick it and a tattooist will put a stencil on you and he do it. That’s his job to do a tattoo—to do a clean good tattoo.  Sometimes a tattooist is somebody who is an illustrator or a painter who happens to know how to tattoo also. Tattooist and Tattoo artist are professionally apprenticed for two to three years.  The difference is most tattooist don’t know how to draw.  Tattoo artists are real artists.  Where people love your paintings, your drawing and they say “I want some of his art on me.” So I only do my own art on people. So you could not come to me with your own design.

So what’s a scratcher?
Anyone who would tattoo outside of a shop, without a license or never been trained and who just bought a kit out the back of a magazine. Anybody who does a tattoo under $40 or $50 that’s a scratcher. Especially up here in DC, at the tattoo parties.  A scratcher gets no respect. Most tattooist and tattoo artist don’t get along with another. So you know a scratcher gets no love. 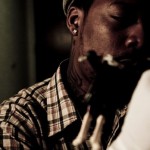 Who did you apprentice under?
Julia Alfonso, an older white woman who was the property of a biker gang and she was a tattoo artist. She took me under. I sought her out and moved to Atlanta to get an apprenticeship.  I was tattooing in the hood. I was a scratcher. That’s how I know about scratchers. And I tried my best to put my foot in the door, but it wasn’t happening in North Carolina. Then I finally got in and I find that black people weren’t getting tattooed. I tattooed everybody else, but I was not doing any of the art that I could relate to.

When I first started tattooing I was doing goth style stuff—zombies and devils. That is not what I’m about, but I was using my talent and I thought maybe I need to go to a place where there are more black people and I can coach the art over to them. The first black people I saw with tattoos was the rock band Fishbone out of Atlanta. And that was my first sign there must be a culture down there. Then when Outkast dropped with Player’s Ball, I knew I had to get down there.

Would you say that now there is a black tattoo style because of City of Ink?
Black tattoo art is all over now. And it stemmed from City of Ink video tapping our events and other cities mimicking or being inspired by what we did. It made them say “Wow I can do that too.” There are a lot of black tattoo artist out there before us and around the same time as us. But they did not know how to market it. They did not bring the business aspect of the business.

“A lot of tattooist fuck up because they try to market themselves to everybody. Which is not effective. Tattooing is not for everybody. You target your talent to the people who like your work.  Focus on that audience. If they like your work then you are not stepping on anybody else’s toes, ever.”

I had to come into my own and find my own lane and come into a new style of tattooing so I could make money.  You got to distinguish yourself.  I focus on the people who like my style. Then there is no competition. People see my work and it draws in more people who like my work. That’s it.

Is tattooing your dream, your passion? Did you intend to go into business and open up the City of Ink shop?
Film is my passion. I use tattooing as a gateway to open my dreams.  I love tattooing but I don’t like the part of sitting down all day, and I don’t like the part of missing daytime. But that’s the sacrifice you got to make because it’s great money. I’ve never worked a job before and couldn’t. What’s a paycheck!?  I can’t go backwards. So I’m working on a book, Before I’m Gone: The Art & Life of Miya Bailey, and I’m working on a film about black tattooing in America.

Tell me about your book. 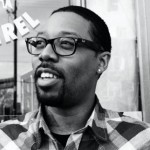 The book is about everything I ever did in my lifetime.  I used to get in trouble all the time with the law so my Mom always kept all my warrants and newspaper clippings of when I was arrested me. I was on some bullshit then. I’m using all of those clippings and pictures and I’m drawing my side of the story. I use my diary and everything to write my story. I got a chapter in their called the “Naked Truth.” Every woman I’ve ever been with in my lifetime I draw naked. They posed for it or I use memory to draw them. It’s not straight portraits.  I write about how I know each one and what each meant to me. The book shows all my flaws. I went back to my high school and got copies of every picture I ever drew and I tell the story behind each of those illustrations representing a phase in my life.

Despite not being part of the system, and having a “fringe” business, you seem to be a rather savvy businessman.
In our shop we do everything.  I try to teach my artist is to create a signature style. That is how you become a millionaire in this business. If you don’t got a signature style you just another person tattooing.

What’s your signature style?
I have a few different signature styles but each one is a style you have never seen before ever.  I make sure I do something total opposite of the typical tattoo or the trends seen in tattoo magazines. My whole goal is to appeal to people who don’t like how tattoos look.

My whole style is flow.

All of my signature styles flow… They all move.

All of my work is moving and contouring to the curves of the body. Everything is freehand. I just use a marker and draw on the body. I follow the curves of the until I see a design that works. And I listen to the person’s idea and I let it inspire me. A lot of times I ask the client what type of music they want to listen to while they are getting tattooed. That always tells a good story. That is the secret to setting the whole entire mood of a tattoo. I feel a vibe and let the music do what it do. Artists and music go hand in hand. The artwork is a visual soundtrack.

What’s next?
I got another two years of tattooing. Focus on promoting my tattoo artist. Open up more shops. I want to tattoo for free. I’m getting to that point where I don’t want to tattoo for money anymore. Because I got to listen to what clients say. I still have to get inspired by their ideas. I don’t want to be inspired by no other person but me. I want a canvas. I haven’t drawn a tattoo on paper in probably eight years. I have not planned a tattoo out. I want to go back to that. Be able to think about the art and have a friend say use me as your canvas for your idea.  I just want to do it for free.