The year was 1861. The American Civil War had shortly begun and the Union Army held control of Fort Monroe in Hampton, Virginia at the mouth of the Chesapeake Bay. In May of that year, Union Major General Benjamin Butler decreed that any escaping slaves reaching Union lines would be considered “contraband of war” and would not be returned to bondage. This resulted in waves of enslaved people rushing to the fort in search of freedom. A camp to house the newly freed slaves was built several miles outside the protective walls of Fort Monroe. It was named “The Grand Contraband Camp” and functioned as the United States’ first self-contained African American community. 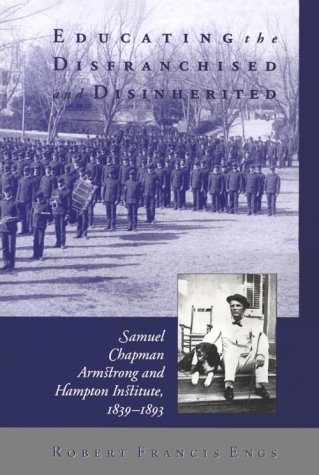 In order to provide the masses of refugees some kind of education, Mary Peake, a free Negro, was asked to teach, even though an 1831 Virginia law forbid the education of slaves, free blacks and mulattos. She held her first class, which consisted of about twenty students, on September 17, 1861 under a simple oak tree. This tree would later be known as the Emancipation Oak and would become the site of the first Southern reading of the Emancipation Proclamation in 1863. Today, the Emancipation Oak still stands on the Hampton University campus as a lasting symbol of the promise of education for all, even in the face of adversity.

Brigadier General Samuel Armstrong was appointed in 1866 to Superintendent of the Freedmen’s Bureau of the Ninth District of Virginia. Drawing upon his experiences with mission schools in Hawaii, he procured funding from the American Missionary Association to establish a school on the Wood Farm, also known as “Little Scotland” adjacent to the Butler School. On April 1, 1868, Armstrong opened Hampton Normal and Agricultural Institute with a simple declared purpose.

“The thing to be done was clear: to train selected Negro youth who should go out and teach and lead their people first by example, by getting land and homes; to give them not a dollar that they could earn for themselves; to teach respect for labor, to replace stupid drudgery with skilled hands, and in this way to build up an industrial system for the sake not only of self-support and intelligent labor, but also for the sake of character.”

By 1872, Hampton Normal and Agricultural Institute was flourishing and drawing students from all over the country. One day that year, a young man met with the assistant principal to request admission. His clothing and person were so unkempt from his long journey he was nearly turned away. The assistant principal asked him to sweep the recitation room. The young man, excited at the prospect of work, not only swept the floor three times but thoroughly dusted the room four times, thereby passing a rigorous “white glove” inspection. Upon seeing the results of his work, the assistant principal said quietly, “I guess you will do to enter this institution.”

The newly accepted student was Booker T. Washington, who would become Hampton’s most distinguished graduate. At only 25 years old, at the request of General Armstrong, Washington helped found Tuskegee Institute in Alabama in 1881.

Enhancing Hampton’s curriculum to meet the stringent requirements of college level accreditation was the focus during the late 1900s and throughout the 1920s. Many new programs were added and the requirements for existing courses were raised to meet the new standard Hampton placed upon itself. A Library Science School was established in 1924 and an extension program was begun in 1929 to reach students who were unable to come to campus. The Robert C. Ogden Auditorium was built in 1918 and with two thousand seats, it was at the time the largest auditorium in the area. Today, Ogden Hall is considered one of the finest acoustical venues in the nation.

In the Principal’s report of 1929, Hampton President Dr. James Edward Gregg stated that “Hampton Institute is now a college.” He went on to state that, “Every one of its collegiate divisions or schools–Agriculture, Home Economics, Education, Business, Building, Librarianship, Music–is fitting its students for their life-work as teachers or as practitioners in their chosen calling.”

On July 1, 1930, Hampton Normal and Agricultural Institute became Hampton Institute and the title of Principal–Dr. George Phenix at the time–was changed to President.

While the Hampton staff was interracial, there were no Negroes employed as heads of departments and schools. Thus, in 1940, a few high-ranking administrative positions–including Dean of Instruction and Dean of Women–were appointed to Negroes. And in 1949, Dr. Alonzo G. Moron became the first Negro president of Hampton Institute.

Accompanying Hampton’s steady growth in the 1960s was the controversial landscape of the Civil Rights Movement and the changing attitudes of Negroes, who were finally able to see the promise of first-class citizenship and equal educational and economic opportunity in a democratic society. Noted civil rights leaders, including Dr. Martin Luther King, visited the Hampton campus. In 1957, two years after being arrested for refusing to give up her seat to a white bus passenger, Rosa Parks moved to the Hampton area where she worked on campus as a hostess at The Holly Tree Inn. On February 11, 1960, a group of Hampton Institute students were the first in Virginia to stage a lunch counter sit-in, to protest local business’ refusal to serve blacks and whites equally.

The social unrest of the 1960s spilled over into the 1970s as students demanded a wider variety of courses, coed living on campus, and a stronger voice in the Administrative Council and the Board of Trustees. In the face of student protests, bomb threats, and dormitory fires, Hampton President Dr. Roy Hudson managed to improve relations with students and expand many programs, including the college’s Engineering program, through partnerships with other universities.

Dr. William R. Harvey was unanimously elected the twelfth President of Hampton Institute in 1978. His efforts included outlining a core set of required courses, establishing an M.B.A. program and centers for high-tech scientific research, and expanding the Continuing Education Program. By 1983, student enrollment had reached nearly four thousand and SAT scores of entering freshmen increased by 93 points, even though national enrollment levels and SAT scores were plummeting.

In 1984, after a nine-month study of Hampton Institute’s rapid growth and development in quality of students, faculty and academic offerings, the recommendation was made to change the name to Hampton University.

Today, over 140 years after its inception, Hampton University continues to break new ground in academic achievement, staying true to General Armstrong’s original promise of The Standard of Excellence, An Education for Life.

0 replies on “[Black History] A Brief History of Hampton University”