Spelman, one of the nation’s most highly regarded colleges for women, was founded by Sophia B. Packard and Harriet E. Giles, two friends who were commissioned in 1879 by the Woman’s American Baptist Home Mission Society to study the living conditions “among the freedmen of the South.” Appalled by the lack of educational opportunity for Black women, the missionaries returned to Boston determined to effect change. On April 11, 1881, they opened a school in the basement of Atlanta’s Friendship Baptist Church with $100 provided by the congregation of the First Baptist Church of Medford, Massachusetts. The first eleven pupils, ten women and one girl, were mostly ex-slaves, determined to learn to read the Bible and write.

Totally dedicated, Misses Packard and Giles returned to the North in 1882 for more funds. At a church meeting in Cleveland, Ohio, they were introduced to Mr. John D. Rockefeller who emptied his wallet during the collection and questioned the two women’s intentions: 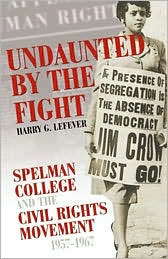 “You know,” he said, “there are so many who come here and get us to give money. Then they’re gone, and we don’t know where they are–where their work is. Do you mean to stick? If you do, you’ll hear from me again.”

Determined to succeed, the women took an option on an Atlanta site that had been used as barracks and drill grounds for federal troops during the Civil War. Sustained by their faith, Misses Packard and Giles worked diligently to gain additional financial support. Subsequently, title of the property was transferred to the Atlanta Baptist Female Seminary, and in February 1883, the school relocated to its new nine-acre site, which included five frame buildings with both classroom and residence hall space. In an effort to liquidate the debt, more than $4,000 was raised by the Black community, $3,000 by the Negro Baptists of Georgia, and another $1,300 from individual contributions. Other important gifts and contributions kept operating costs at a minimum. Teachers volunteered their services and gifts of furnishings; supplies and clothing were sent from the North. As enrollment steadily increased, the normal school curriculum was expanded to include sewing, cooking, millinery, and other preeminently practical subjects.

In April 1884 on the third anniversary of the founding of the school, Mr. John D. Rockefeller was indeed heard from again. Visiting the school with Mrs. Rockefeller, her sister and her mother, Mrs. Lucy Henry Spelman, Mr. Rockefeller was impressed enormously with the seminary and settled the debt on the property. Later, the name of the school was changed to Spelman Seminary in honor of the Spelman family, longtime activists in the Anti-Slavery Movement.

During the first 10 years, the school flourished with 800 pupils, 30 teachers, and property valued at $90,000. Harriet E. Giles succeeded Sophia Packard and served as president of Spelman for the next 18 years, a period marked by maturation and progress. The Seminary conferred its first college degrees in 1901. A year later, the Seminary celebrated its 25th anniversary as an institution that had filled a spectrum of needs for thousands of Black women–from grade school through college. Miss Giles’ death on November 12, 1909, marked the end of a remarkable era.

Spelman’s brisk and positive president believed that training teachers constituted the most efficient use of the school’s resources, and with the help of the Rockefellers, she acquired the facilities to strengthen the program, offering elementary and secondary education and home economics courses. On June 1, 1924, the name of the school was officially changed to “Spelman College.”

One of the most significant events in the College’s history was the signing of the Agreement of Affiliation between Spelman College, Morehouse College, and Atlanta University in April 1929. The agreement set up a university system in which Spelman and Morehouse served as undergraduate institutions and Atlanta University as the graduate school. Eventually, Morris Brown and Clark Colleges joined the affiliation in 1957, the Interdenominational Theological Center in 1959, and the Morehouse School of Medicine in 1983. The largest consortium of Black colleges was ultimately renamed the Atlanta University Center (AUC).

Like their leaders, Spelman women are outstanding in many fields, and their achievements attest to the quality of the institution. With its rich heritage and high standards, the College will continue to provide a first-rate liberal arts education for its students in an environment of excellence.