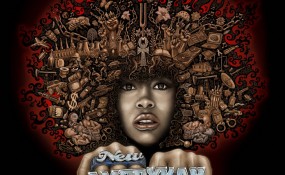 There was much buzz about Erykah Badu’s new release “New AmErykah: World War Part 4.” I heard the first release Honey on 95.5 WPGC and wondered if Erykah had rolled over in bed and coughed a song into the mic. The song sounds lazy and underdeveloped. Good enough for the radio, but not good enough for her talents or her fans. Convinced the rest of “New AmErykah” would be the same, I passed on buying it. Later, I found my suspicions were only 90 percent accurate.

My little brother, (disclaimer: a rabid fan of Pretty Ricky), bought “New AmErykah” and told me it was garbage. So I figured if she could not satisfy his radio pop ears, then why bother. But on a night he picked me up from the train he had the track “Twinkle” blazing from the car. And I was feeling it, fierce. The percussions are rocking and Badu’s sweet and testifying voice is spitting truth. I’m bobbing my head and thinking I need to check myself. Four minutes into the song, I realize Erykah did not roll out of the bed and cough something into the mic. But instead Erykah and her circle of Badus got up and decided to put an “art project” on a CD. At four minutes into the song a man starts speaking in an ancient African/Egyptian dialect followed by an angry rant from some dude named Saul. “Uh-oh,” I thought. “Who does Erykah be hanging around these days?”

The next track, Master Teacher, is more consciousness. Yes Erykah I’d rather there be Master Teachers instead of N*ggas. But can you be a bit more creative with how you deliver your message. After listening to King Tut and Saul’s diatribe, I need a break and this is a drag. Yet the bottom half of Master Teacher, at 3 minutes and 30 seconds into the song, the vibe changes. And it is a beautiful and relaxing change. Badu sings about her baby girl, about lovers, about church, about life, about staying awake! This is an awareness that does not beat me over the head and allows me to walk into work without a complex or attitude.

The rest of “New AmErykah” does not sound new at all, save for the track Cell that also has a higher-learning message and is compositionally a classic Badu cut, yet at the end the hook is repeated acapella ad nauseam. The CD feels like an exercise in group self-catharsis. And I wasn’t invited.

“New AmErykah” is isolating and distant. Out of eleven tracks only three cast a glimmer on Badu’s stellar talent. “New AmErykah: Part Two” is coming out later this year. Lets hope she has gotten up out of the bed and shaken off the stardust to shine.