How a demand for lunch fueled the push for rights

NASHVILLE, Tenn. – Fifth Avenue downtown bustles with activity on a blustery recent afternoon. People of all races mingle: This could be any mid-sized city in the United States, circa 2010.

Fifty years ago, things were different. The stores along Fifth – specifically, their lunch counters – and the city itself were the site of a battle that also played out in dozens of other cities in the South.

The fight pitted black college students and a few of their white peers against the city’s white power structure and its downtown merchants over the right to sit down and eat lunch. At the time, blacks could spend money in those stores but couldn’t eat at the stores’ lunch counters.

The lunch counter of 1960 was the equivalent of fast-food restaurants today. Hamburger chains were just beginning to appear on the American landscape. Ray Kroc had opened his first McDonald’s about five years earlier; Burger King had gone national just the year before. People wanting a sandwich or a hamburger popped over to the lunch counter of department stores, drugstores and five-and-dime stores to have a bite.

Starting 50 years ago today, students across the South decided to change that.

The tactic they chose was simple: They sat at lunch counters and waited to be served. The stores refused to serve them, and the students were arrested and hauled off to jail, sometimes after being beaten and spat on by white mobs.

The tactic became known as sit-ins, and in 1960, tens of thousands of students across the South were doing it – protesting racial discrimination that had scarred their parents, risking their futures to try to ensure a better one for their children.

The sit-ins – and the students they attracted – reinvigorated Martin Luther King Jr.’s civil rights movement, which had begun to flag after the success of the Rosa Parks-inspired Montgomery bus boycott of 1955-56.

“The sit-ins were the real starting point of the protests of the 1960s,” Carson says.

“After Montgomery, King hadn’t been able to sustain momentum. The sit-ins took the initiative away from King and the NAACP. You had these students, in some ways, leading King,” says Carson, director of the Martin Luther King Jr. Research and Education Institute at Stanford University and head of the Morehouse College King Collection.

The protests would groom a new generation of black leaders, and they would provide inspiration for movements that followed, says Reavis Mitchell, history department chairman at Fisk University here.
“The sit-ins had, and they continue to have, a tremendous impact,” he says. 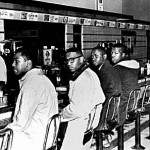