Politicians are constantly being scrutinized about what color they should or should not wear. Campaign managers and image consultants know that the colors a politician wears will speak volumes about how they are perceived and how they make others feel about them. The colors we incorporate into our own wardrobe and aesthetic presentation can be just as important to others perception of you. Below are some color choices that are highly likely to be as monumental to your image as this race for the White House.

Black is the color of power and authority. A little black dress is a timeless entity in itself that says: simple yet bold. Black is the color that is also widely known for slimming a figure. However, to avoid coming across as plain, jazz up your black apparel with an eye-catching colorful shoe such as purple or silver. Women of any skin or hair color would look great in this color. On the day that Hillary suspended her presidential bid she wore a black suit.  This may have been a great choice because it allowed her to be more obscure, plain and simple, thus respecting that the true limelight should be focused on Barack Obama, who ultimately won the Democratic primaries.

White is the color of purity and innocence. The color itself is not widely popular, but it is also a feasible color to wear as by fashion standards we only have a few months we can wear the color without being penalized (to be worn after Memorial Day and before Labor Day.) White is a good color to wear if you are trying to clean up your image or people’s perception of you. White is parallel to an angelic persona. However, the color is not an easy color to keep clean. Michelle Obama wore white during a UCLA rally. She pulled wearing this color off by pairing it with a gorgeous blue double strand chunky necklace. This look made her look very approachable.

Red is the first color that attracts the eye. Red is parallel to sexiness or a bad girl persona. It is also the color of love. While many male politicians may wear red ties, the color also conveys confrontation or conflict. This color may be best used as an accent color rather than a primary color. When worn as a ball gown color, you are sure to be the main attraction of any black-tie affair. If your hair were blonde or black, red would look exceptionally fantastic on you. If your hair is red or brown, you may want to try another color. However, be careful wearing red as every villain portrayed in cinema, television and books almost always wears red. Cindy McCain wore a red leather fitted jacket when she proclaimed, “I don’t know about you, but I’m proud of my country.” 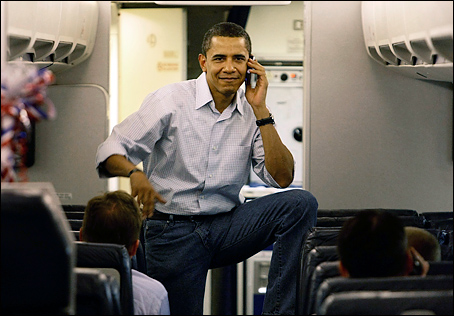 Blue is one of the most popular colors of the color chart. While red may scream confrontation and anger, blue does the opposite and translates to tranquility, peace and calmness. Politicians wear the color blue because it symbolizes loyalty. Blue can also come across as being cold and standoffish, so experiment with the different gradients and hues of blue. For example, powder blue is softer than electric blue. Michelle Obama and Jill Biden both wore this color during Joe Biden’s speech at the 2008 DNC. Perhaps the wives demonstrated being at peace with the newly paired Obama/Biden ticket. Michelle also wore blue during her speech on the first night of the DNC 2008. Wearing blue attributed to her loyalty to America after she continues to dispel the misinterpretation of it being the first time that she’s “proud of her country.”

Green symbolizes wealth. The color of money is also the color of foliage. Thus green is also a color that represents nature and fertility. Green is a very relaxing color. Redheads look amazing in green because the two colors are complimentary to each other. Women with olive toned skin should stay away from this color as their skin and the clothes may blend in too much. On the day that Hillary had to answer questions about her lies regarding the Bosnia trip and ducking from sniper attacks, she wore a green four-leaf clover scarf. Perhaps by wearing the color green, she wanted to assert herself as being a grounded and relaxed person who would never lie about false sniper attacks.

This color is very interesting. Yellow represents sunny and cheery feelings, but people are more likely to lose patience with this color. It could be that women wearing this color could be considered a “Goody-Two Shoes” or an annoying “Miss Perfect” type. The color is considered to be an optimistic one, so variations of yellow should be considered. Bright yellow may be hard for the eye to take in, but mustard yellow may induce a calming affect. Blondes, redheads or fair skinned women should shy away from this color. Yellow looks best on women with black or brown hair. To offset the sugary sweet cheeriness of yellow, pair it with a nice set of peacock blue shoes. This will show others that you are grounded and have some balance. Hillary Clinton pulled off wearing this color beautifully during her speech at the 2008 DNC. She appeared softer and more approachable, thus erasing her “Ice Queen” image.

Purple is widely known as the color of royalty. All things royal are also connected to wealth and entitlement. This color stems from the red family and can also be a romantic color. Purple is great for African-American women and women with black hair to don. It is also a great color for accessories such as a purse, shoes or a brooch. Michelle Obama pulled this color off exquisitely when she shared an infamous fist-bump with her husband Barack. She looked regal and fierce without being intimidating. The black belt she wore broke the color up and accentuated her figure. By wearing this color, she presented herself as the true royal queen in Barack’s life.

Whatever ever color you choose to wear and present yourself in, remember it’s your attitude, personality and temperament that will truly let others know what kind of person you are. To present yourself in the best light, always remain true to yourself or at least politically correct.

Writer Maya-Camille Broussard is a proud Hyde Park-residing-Chicago-representing-Donkey-sign-carrying-supporter of Barack Obama…regardless of what color he wears!