We spotted this on the Fisk University Blog.  Keep up the good work! 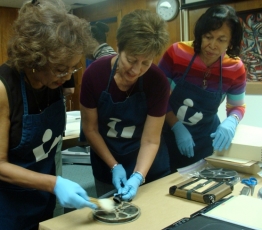 During the workshop, the library staff of both universities have participated in discussions and demonstrations involving surface cleaning, rehousing and handling motion picture film, as well as flattening, constructing and housing panoramas.

The Workshop functions as part of the HBCU Library Photograph Preservation Summit initiative. The Photograph Preservation Summit is comprised of ten HBCUs noted for their special collections divisions. The preservation initiative is funded by a $1.2 million grant from The Andrew W. Mellon Foundation. The grant was awarded in 2007 to the Art Conservation Department at the University of Delaware and the Southeastern Library Network (SOLINET), in partnership with the HBCU Library Alliance and the Conservation Center for Art and Historic Artifacts (CCAHA). The summit is part of a 30-month, four-phase initiative to improve the preservation and conservation of significant photographic collections held within Historically Black Colleges and Universities (HBCUs). Fisk and TSU are among the ten institutions that comprise the HBCU Preservation Summit.