My One Problem with the Obama’s Educational Plan 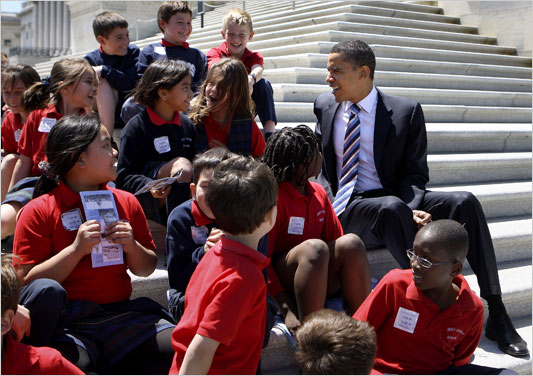 This topic is getting some good run on RRU.  Its a great topic to share with the world.

Obama also proposed longer school days which is an excellent
idea….I agree with everything that is bolded…BUT I disagree with
the statements that are bolded and underlined…

This is my opinion…teachers pay should be raised-period!! None
of this merit mess!!! Don’t tell me we don’t have the money..we came up
with billions to bail out banks…billions to fight two wars…..the
federal government can help fund higher pay for teachers…. I am
against any incentive based pay for teachers..

here’s why: women have always made up the majority of teachers…thus, education is a appreciated profession…I want education to be a respected profession; higher pay does that..

men are not attracted to the profession b/c of the pay…how can
you dream of supporting a family on teacher’s pay…I know men do it
but most men won’t consider education b/c of the pay and male ego, “I
ain’t being no teacher; that’s woman’s work”

That’s my opinion- what’s yours?

Obama seeks higher standards for education
Plan aims for system that’s ‘envy of world’
By Christi Parsons |
WASHINGTON — President Barack Obama on Tuesday laid out his vision for changes to the American education system, which includes a controversial plan to increase pay for high-performing teachers as well as more money for states that raise student standards, track student progress and cut the dropout rate.

Much of Obama’s speech to a group of Hispanic business leaders, his first address on education since taking office, focused not on detailing federal programs but on encouraging Americans to raise standards on their own.

He called for longer school days and extended school calendars, more charter schools and a greater effort to recruit promising candidates to the teaching profession, as well as a renewed commitment from parents to support their children’s education.

“It is time to prepare every child, everywhere in America, to outcompete any worker, anywhere in the world,” Obama said. “It is time to give all Americans a complete and competitive education from the cradle up through a career.

School voucher program may be allowed to expire
Formerly hostile unions say, ‘Let’s talk’ “America’s entire education system must once more be the envy of the world, and that’s exactly what we intend to do,” he said.

The comments echoed themes of Obama’s presidential campaign. They also built on recent remarks to a joint session of Congress in which the president set a national goal of having the highest proportion of college graduates in the world by 2020.

It also promises to invest in innovative teacher preparation models and to support dropout prevention programs with federal money. It also would expand a federal program that raises pay for teachers based on their performance.

As outlined in the federal budget proposal he released last month, the president also promised to raise the maximum Pell Grant for college students and to index that grant to inflation, and also to expand the low-interest Perkins Loan Program for needy students.

Leaders of one teachers union were heartened by Obama’s talk about education funding.

“What he showed is that, when he talks about policy, he’s also going to talk about putting resources there,” said Dennis Van Roekel, president of the National Education Association.

Teachers unions generally are skeptical about merit-pay proposals, and Obama did not speak of merit pay in chiding Democrats who oppose the idea of “rewarding excellence in teaching with extra pay.”

Van Roekel said he was not threatened by the president’s words about teacher pay because Obama didn’t speak specifically about linking pay increases to student test scores. He said he hoped that means Obama will be open to the tack that Education Secretary Arne Duncan took when he led the Chicago Public Schools, in which teachers received additional pay for completing rigorous graduate training.

“When Secretary Duncan was in Chicago, what he focused on was not test scores but on teachers who are national-board-certified,” Van Roekel said. “He was right. It paid off. That is being paid for performance.”

“Nothing is more important or more difficult than finding fair ways to pay the best teachers more for teaching well,” Alexander said.

While the nation’s largest teachers union, the American Federation of Teachers, praised Obama’s vision, its president also said it was too early to fully judge the plan.

“As with any public policy, the devil is in the details,” union President Randi Weingarten said, “and it is important that teachers’ voices are heard as we implement the president’s vision.”