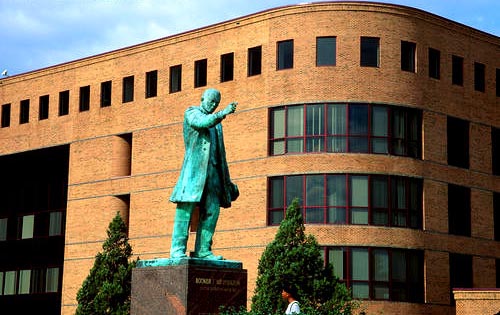 Hampton University was on lockdown Sunday after three people — including the shooter — were shot in the lobby of an on-campus dormitory.

A former HU student came to campus before 1 a.m. and shot the 62-year-old night manager of an on-campus dormitory, as well as a 43-year-old pizza delivery driver who happened to be standing nearby, said Hampton police spokeswoman Paula Ensley.

The former student, an 18-year-old from the Richmond area who left the school several months ago, then turned the gun on himself, Ensley said.

All three people shot were taken to area hospitals, and were listed in stable condition. One was flown to a hospital by helicopter . “It doesn’t appear at this time that the injuries are life threatening,” Ensley added.

Police were trying to piece together a motive or the facts that led to the shooting. “The detectives are actively working on all that right now,” Ensley said. “We don’t know at this time.”

No current students were injured in the shooting, police said.

The shooting occurred in the lobby of Harkness Hall, a four-story brick building on Huntington Road. That’s a street that near the southwest corner of the HU campus, near a steam plant and northeast of the James Creek.

HU was on lockdown Sunday morning while police investigate. Both Hampton police and Hampton university police were investigating, with city police leading the investigation, Ensley said.

After the shooting, students, faculty and staffers were notified via text messages and voice mails, said Leha Byrd, who works in the university relations department. Byrd said she did not immediately know what time the message was sent out.

Some students told the Daily Press Sunday morning that they didn’t get such a message.

“Some students and parents are telling us that as well,” Byrd said. “We’re not sure what the glitch was. We’ll have to work that out as we go ack through this, as we identify our system of how we do things. But we did take the official step of sending the texts and voice mails out.”

Sunday morning, all roads going in and out of the campus were block off, with university police officer driving an aggressive patrol around the campus’ perimeter. Hampton city police officers were walking and patrolling on streets outside the campus, with at least one officer taking information from witnesses.

There was an eerie quiet over the campus Sunday morning. Only handfuls of students were walking around, instead of the flood of students that would typically be out on a Sunday morning to attend church services and other functions.

One student who was returning to her dormitory early Sunday — about the same time that police cars and fire trucks were heading to the shooting scene –said that she and a lot of other students found out about what happened through the social networking website Facebook and text messages from friends.

The student, who didn’t want to be identified, said she regularly checks Facebook using her cell phone.

The student said that at first she though the emergency vehicles she saw were part of a campus drill, but soon realized that it was more serious, especially when she saw and heard a helicopter land on campus.

She said some students were confused and shocked that something like this could happen on campus, and they were still trying to find out exactly what happened.

HU spokeswoman Yuri Rodgers Milligan said officials were deciding whether to hold a press conference on the shooting later in the day.