PETERSBURG – The link between education and freedom was the thread in the commencement address by prominent civil rights activist Professor Angela Y. Davis at the 2009 Annual Winter Commencement Convocation at Virginia State University yesterday. 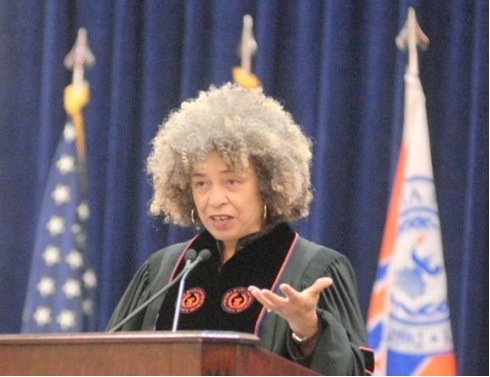 “Freedom is the most meaningful to those who have not always been able to enjoy it,” Davis told the 300 new graduates. “Education is the most important ingredient of freedom.”

With Davis as keynote speaker, VSU managed to have one of the most influential and internationally known social activists address the alumni. Davis is mostly known for her contributions to the civil rights and Black Power movements and human rights struggle in the late 1960s and early 1970s. She once made it on the top 10 list of America’s Most Wanted, but all criminal charges were later dropped.

For the past four decades, Davis has been a tireless fighter for racial justice, gender equality and gay rights. VSU President Eddie N. Moore Jr. called her a “living witness to and participant in historical struggles of the contemporary era.”

Davis reminded the audience that currently 2.3 million Americans are behind bars, most of them African-Americans. She offered education as a means to escape a life of crime and desperation. “We have one black man in the White House, but too many to count in the big house,” she said. “How will you use the knowledge acquired here to further the cause of freedom?”

Davis also told the alumni about their fortune to have graduated from VSU. “Think of how you have inherited your histories and how privileged you are to have attended this institution,” she said.