Coach Gibson Has FAMU Getting Attention 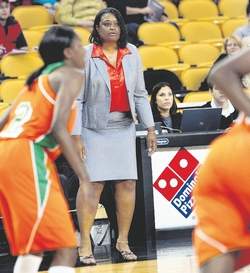 TALLAHASSEE | Not even the optimist in LeDawn Gibson saw this coming:

The Florida A&M Women’s basketball team is 8-3, a respectable start for a team that went 14-17 a year ago in Gibson’s first season.

But the Lady Rattlers have built a reputation this year as upset artists after stunning South Florida and Florida on the road and then handling Alabama at home. FAMU also came close against Missouri before losing by just four points.

What’s impressive is that the Rattlers have found ways to win while adjusting the starting lineup to overcome injuries. Senior guard Deidra Jones is averaging 13 points per game, but she missed more than a month after tearing the anterior cruciate ligament in her right knee in the win over Florida. But Tameka McKelton (13.4 points) and Qiana Donald (10.4 rebounds) have picked up the slack. And former Lake Gibson standout Antonia Bennett, the team’s top shooter, has averaged 11.5 points and 6.2 rebounds while playing with a right ankle injury she suffered in the preseason. Bennett leads FAMU in field-goal percentage (45.5 percent) and is tied with McKelton with 17 three-pointers made.

“We have to concentrate on the MEAC and don’t live on what we did before,” Gibson said. “We’re very talented. We just have to keep our heads together.