Hampton’s President Harvey on Impact of Schools on Local Economy

The biggest challenges that face the Virginia Peninsula in 2010 are overcoming continued high unemployment and deep cuts in local and state budgets. Hampton Roads’ jobless rate was 6.5 percent in October 2009, compared to 4.4 percent in October 2008. Newspaper headlines scream that state and local budget cuts will adversely affect public works, parks and recreation, special events, public safety and transportation. Against this backdrop, we can say, “Woe is me” or creatively and aggressively work our way out of this economic malaise.

Partnerships between municipalities and universities may be one of those creative vehicles utilized as an economic driver. There are several national examples of research institutions that have positively impacted the economy of their regions.

In Hampton Roads, Hampton University has quietly become one of those economic powerhouses. In fact, between 2000 and 2007, Hampton led all universities in Virginia in securing contracts from the federal government.

The current research at HU has and will continue to impact the Hampton Roads regional economy. Two examples help to illustrate this point.

In addition to bringing cutting-edge technology and medicine to our area, the Hampton University Proton Therapy Institute has already made a significant impact on the local economy. During the construction phase of the Proton Therapy Institute, 2,000 jobs were created, which generated employment compensation of approximately $12 million. When the Institute is fully operational, it will employ 127 individuals, generating over $5.1 million in annual compensation. In addition, the proton center has attracted over $12 million in federal and private research funds. With 60 percent of the patients traveling into the area for treatment and being visited by family and friends, between $9.6 million and $19.2 million will be generated during their stay.

The HU Center for Atmospheric Sciences’ latest research project culminated with the launch of a $140 million weather satellite from Vandenberg Air Force Base in California. Of the $140 million, $79 million was contracted to businesses in Virginia.

HU’s Skin of Color Institute and the Energy Training Institute, along with other research activities, produce similar economic benefits to the community. Over the last several years, Hampton University has invested over $100 million into the Virginia economy.

These economic facts make it easy to understand the economic power of a quality research program. What may not be so easily understood by the average citizen is the need for partnerships between local governments and universities to reduce unemployment, create jobs and advance economic development.

HU’s partnerships with local and state governments affect the average citizen directly. In addition to direct payment of wages, other expenditures by these workers, such as home and vehicle purchases, shopping, recreational activities and restaurant visits, amount to a tremendous economic impact. This means that carpenters, brick masons, electricians, roofers, salespersons, waiters and waitresses, real estate persons, physicians, medical physicists, dosimetrists, nurses, researchers and others benefit from the research partnerships between municipalities, businesses and HU.

The economic impact that Hampton University has had with academic research clearly convinces me that universities, municipalities and businesses working together in Hampton Roads will make our region a greater place to live, learn and work. 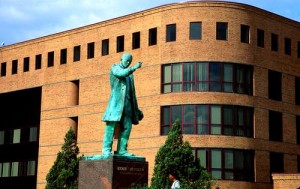