When Todd Bozeman faced the news media Friday, he was pleasant but far more somber than he had been a day earlier as he talked about Morgan State’s chances against West Virginia in the opening round of the N.C.A.A. tournament.

Bozeman’s 15th-seeded Bears were crushed by No. 2 West Virginia, 77-50, but he told his players not to let the defeat mar what had been a heroic season. Heroic, not because of victories or a Mid-Eastern Athletic Conference championship, but for displaying grace under pressure during a season of heartbreaks.

The senior guard Troy Smith’s daughter, who was born blind, had a tumor removed.

The popular freshman forward Anthony Anderson, who redshirted last season, was found to have leukemia sometime after the first day of practice.

Bozeman used the numbing events to underscore his favorite message: the power of overcoming obstacles. “Everybody is going to have adversity,” he said. “It just depends on how you deal with it.”

Bozeman is an embodiment of fighting through adversity. 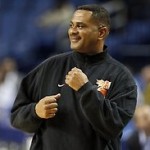