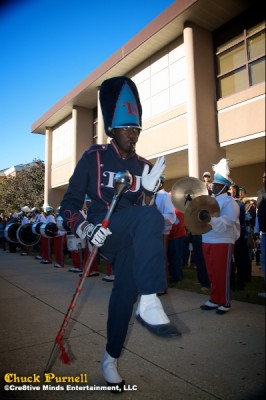 My visit back home for DSU Homecoming October 16, 2010 was monumental on all sorts of levels. It’s always feels good to go back and be in the company of old friends and classmates and catch up on all the latest news and of course have fun in the process!

Delaware State’s campus has changed for the better over the years and it keeps getting better. The addition of several new buildings on the yard was impressive to see. The DSU “Approaching Storm” Marching Band did their thing both on the field and off and was impressive to watch as well.

Everything from the Alumni Social at “Fire-N-Ice” inside the Dover Downs Casino that Friday night was off the chain. After the social many of us headed to downtown Dover to Lookerman Exchange where my Frat. brother DJ Togi had the party jumping the whole night. A short distance away there was another Alumni party taken place at the Duncan Center which I am told was a good look as well.

Seeing old friends at the game and meeting and networking with new folks proved to be a good experience as well. The partying continued well into the night on the campus where each Greek organization had activities going on at their respective Plots. Some sang hyms, some danced and socialized, some stepped, some cooked and above all we ALL had fun!

Later that night Homecoming festivities continued with a concert in the campuses EH building with recording artist Chrissette Michelle. Across the campus in the gym for the younger students, Rick Ross and Gucci Mane ripped up the stage and over in the brand new Martin Luther King Student Center was the location for the Alumni Party! This was the party to be at! They had one good size room for older alumni with a live band and large dance area. In the another large room, DJ Togi and DJ Kam had it packed spinning all the hip hop and old school favorites then out in the main lobby of the student center DJ Enuff had yet another party going on with the dance area jam packed!!! Also they had various food stations around and you could fix yourself a plate of food if you wanted!

My pictures that I submitted speak louder than words and shows just how much fun we all had at DSU’s 2010
Homecoming this year! I am glad I was able to document such a festive event and I can’t wait to do it all over again next year!