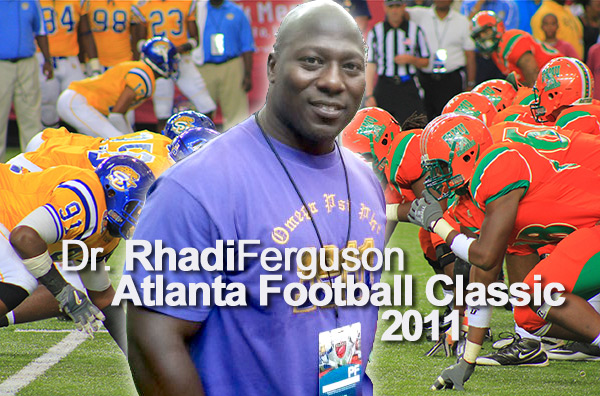 First and foremost let me say this…
“This ain’t no doctoral dissertation or no scholarly journal. I’m just gonna keep it real! And tell the story as an HBCU alumni would tell it.”

As a 2-Time Howard University Alumnus (1997, 2002) and a staunch “Bison for Life” I found myself in a very weird situation this weekend when called upon by one of the masterminds of the AlumniRoundup.com, Be Moore, to “cover” the Atlanta Football Classic.

There I was in a stadium with a sea full of Rattlers and Jaguars and I was one but of a few Bison in the arena. There was just shy of 60,000 fans in the building and the bands were playing and I could feel myself being tugged.

Should I… “root for FAMU and allow our Mid-Eastern Athletic Conference ties and my love for the Marching 100 and my great relationship that I have with the Upsilon Psi Chapter Ques cause me to lean towards supporting FAMU? 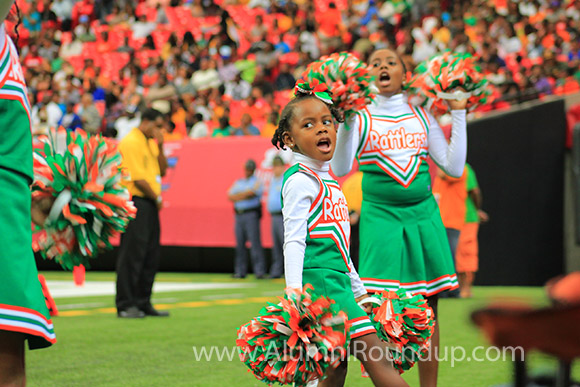 Should I…”allow my ‘Rattler HATE’ (LOL) and my appreciation for Southern beating FAMU in 1996 early in the season which allowed us to beat them in the Heritage Bowl and and become the 1996 Black College National Champions and my love for the Beta Sigma bruzz cause me to lean for the Jags? 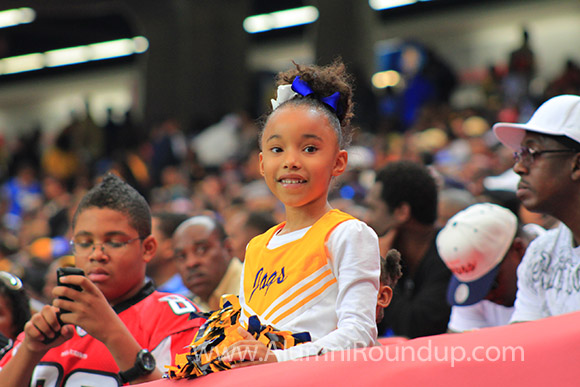 I had a decision to make.

So, thanks to the good people at Alumni Roundup, I walk into the tunnel for access to the field and immediately to FAMU’s sideline. And in classic MEAC fashion its a party down there. There are execs from BET, Angie Stone, Ed “Too Tall” Jones, Rashan Ali, AJ Calloway and many other folks. 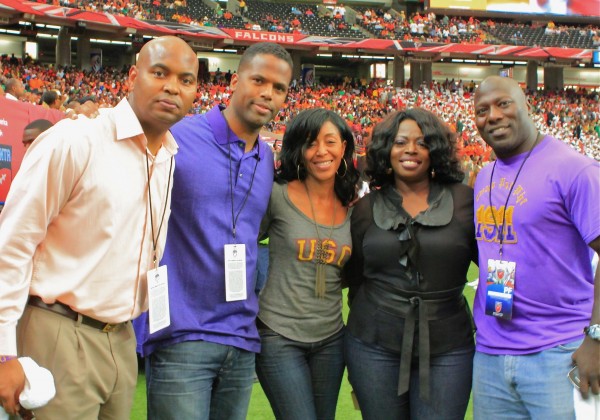 The band was playing and we were jamming… but… FAM was losing (from now on I will refer to FAMU as FAM because that’s just how we say it. For example… “where did you go to school?” The reply is, “FAM.” LOL. All my HBCU folks know the deal).

So, FAM was losing and was down 19-17 with a couple of minutes to go in the half. 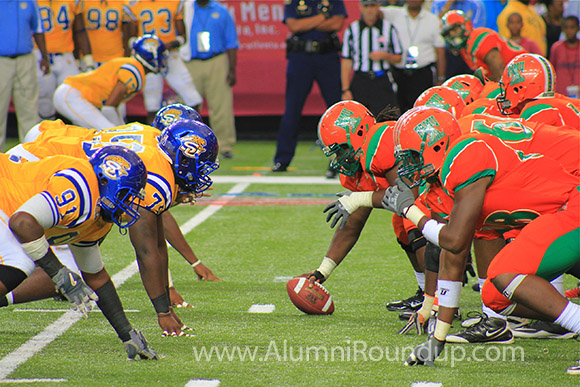 So I left the sidelines and decided to go up into the suites section of the stadium so I could watch the battle of the bands with a birds eye view. Because as quiet as it is kept, the stadium is the most packed when the bands are playing. (Side note: this is the complete opposite when watching games of predominately white colleges also known as PWCs or PWIs, where the “I” stands for institution, just in case you are intersted in doing some scholarly research). 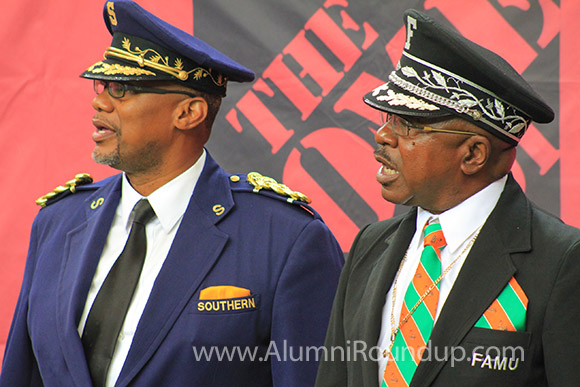 And what do you know… I was in the stadium suites with Former Detroit Mayor Kwame Kilpatrick (FAMU Alum), Dr. Bobby Jones, Emmanuel Lewis (Clark Atlanta Alum) and many representaitves from the 100 Black Men organization. It was a good vibe. So… I grabbed myself a plate of pulled pork, a scoop of potato salad and a diet coke and sat down to watch what I called a MASSACRE!!! 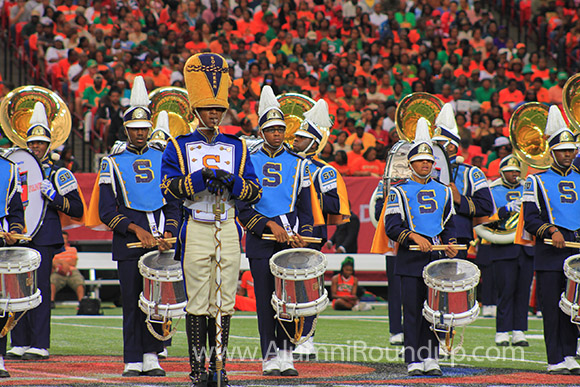 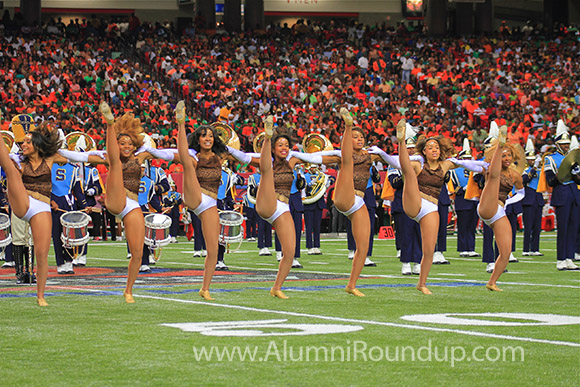 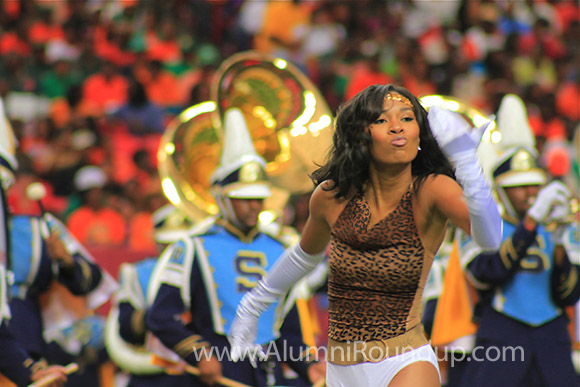 Southern’s band came out and played well. Their formations were sound. They were quite good, BUT (and that’s a big BUT) FAM’s band slaughtered them. The whole stadium was talking about it. It was a surprise to hear that on television they awarded the battle of the bands to the Jags. I was there and I’m teling you right now that such as NOT the case.

FAM had about 300 people in their band and they were tight and at the end of their show they got into formation and spelled out “SU SHUT UP” for Southern University Shut Up….the crowd roared!! It was spectacular and hilarous. 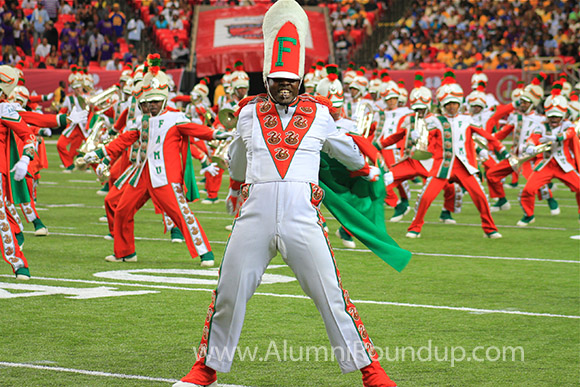 If you don’t know what this is… lemme explain. At Black college football games we go for the game and for the fellowship. More often than not when you don’t see people in the stands its because they are walking around the stadium. I could literally write a 30 page paper on this phenomenon, but I won’t get so deep today.

And then I heard somebody say, “Ferg!”

I turned around and it was fellow Bison and Atlanta Attorney, Michelle Arrington. Michelle says, Ferg, you must come meet my dad!” So I walk into the suite meet Mr. Arrington (Clark Atlanta Unversity Alum) who is known in Atlanta as Judge Arrington and Michelle introduces me as “Dr. Rhadi Ferguson” and I’m beginning to love the fact that I attended an HBCU all over again.

Then I look up at the screen and FAM has the ball getting ready to score and the score is… 33-31 in Southern’s favor. FAM ends up scoring and then kicks off. The Jags are driving down the field and but the drive is stopped and FAM ends up winning the game 38-33. It was fantastic.

And then bands played on…

It was an awesome time. Next year I’m taking the kids. I LOVE Black College Football. 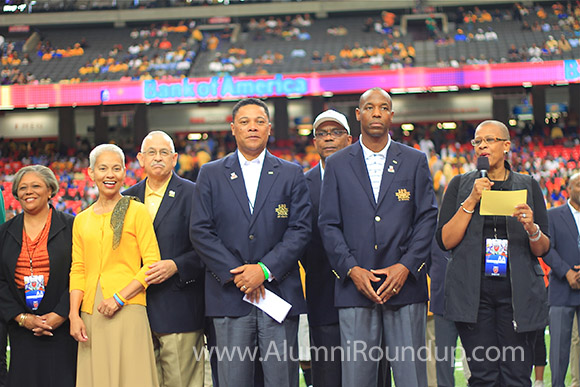 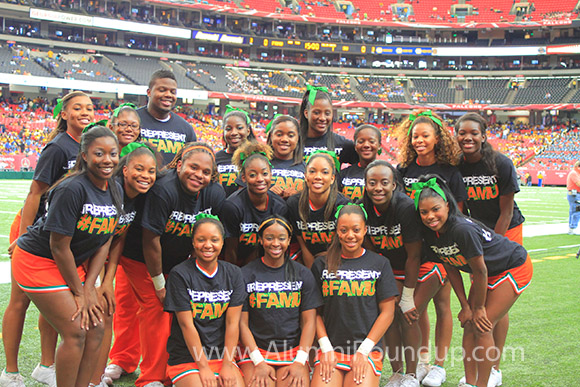 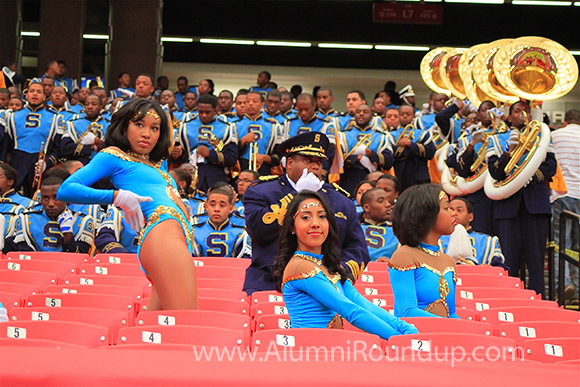 – – –
Guest post by: Dr. Rhadi Ferguson
All Photos and video courtesy of RoundupRussy.