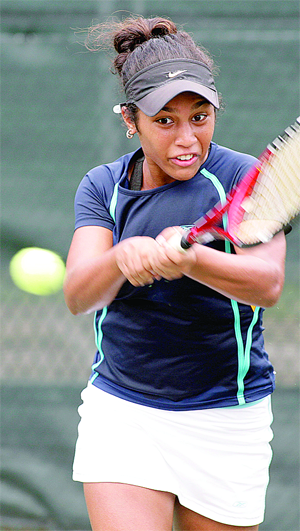 Southern University tennis star Carlista Mohammed showed recently that her brilliance is not limited to the courts as she picked up an award for Excellence in French.

Carlista received the award from her French teacher Dr. Sybill Carter for being the most outstanding student in the language last semester.

Carlista, the Tennis Trinidad and Tobago 2008 Player of the Year, revealed that she prefers French to English.

“French is my favorite language because I like how it sounds and the culture,” she said.

The national champion was very elated upon receiving the accolade. “I feel very accomplished and happy to have received that award,” she explained.

Carlista has been enjoying success on the tennis courts as well, leading her university to victory in the 9th annual HBCU National Championship in September last year.

Carlista received a tennis scholarship from Southern University in 2008 and is currently majoring in linguistics with a minor in sports psychology.