Seventeen Naval Reserve Officers Training Corps (NROTC) midshipmen are working toward their undergraduate degrees and commissions in the Navy and Marine Corps at the newest NROTC host school — Tuskegee University.

The Tuskegee NROTC unit was approved in the summer of 2009 and immediately began to enroll students and establish a unit presence on the campus.


Tuskegee is now one of eight Historically Black Colleges and Universities (HBCUs) that host NROTC units. Although the NROTC program was established in 1926, there were no NROTC units at HBCUs until Prairie View A&M (Texas) joined in 1968.

According to Capt. Dell Epperson, Professor of Naval Science at Tuskegee University, the 17 Tuskegee NROTC midshipmen, among the more than 360 midshipmen enrolled at HBCUs across the country, have gotten off to a good start. 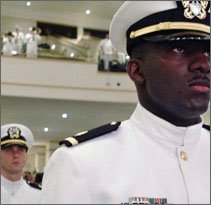