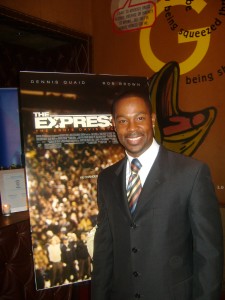 Earlier this month, The Joint Interest Group and actor Darrin Dewitt Henson hosted a special red carpet promotion for “The Express: The Ernie Davis Story”. Bombay Sapphire Gin sponsored the exclusive event, which went down at the swank Aspen Restaurant and Lounge in New York City. The film tells the story of Ernie Davis, the first Black player to win the coveted Heisman trophy. Henson, who portrays iconic athlete-turned-actor/humanitarian Jim Brown, was gracious enough to sit down with members of the press before the party to discuss his preparation for the film and how he was inspired by both Brown and the late Ernie Davis.

The Bronx-born Henson, who is also known for his work as an award-winning choreographer (his “Darrin’s Dance Grooves” is the best selling American dance video in history), trained three months and gained forty pounds to portray the massive former running back. The two men were first introduced on the set of the series “Soul Food”, where Brown made a guest appearance. Henson was excited to have the opportunity to portray the legend whom he considers to be both a friend and an inspiration and he called upon Brown throughout the filming to help him “tell the truth”. In addition to his physical preparation, Henson did a lot of reading about politics, economics and even the Constitution. He did this to capture the cerebral essence of Brown who he describes as “one of the most intelligent men I know”.

Henson cites The Express as a film that “(continues) to tell the story about what we have to do as a people.” The story of Ernie Davis is an inspiring, yet heartbreaking one. The running back had an illustrious collegiate football career at Syracuse University and was the number one pick in the 1962 NFL Draft. Davis wore the same number 44 that Jim Brown wore in his Orangemen days and the two were supposed to share the field as members of the Cleveland Browns. However, the young player was diagnosed with leukemia that same year and passed away in 1963, having never had the opportunity to play a professional game.

The actor emphasized the film’s message of commitment to greatness and triumph over adversity. He quoted Brown as saying “I will not wear mediocrity as a tie. I will only wear excellence”, words that he has taken to heart throughout his career. The Express is the NAACP award winning actor’s twelfth film since 2002. Next year, he’ll appear as “Raven” in a film adaptation of the wildly-successful Tekken video game.

The Express is in theatres nationwide.