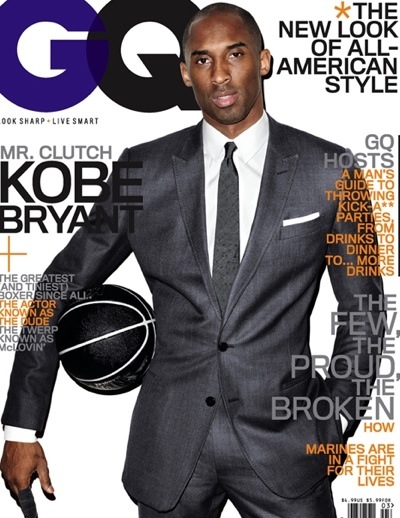 Here’s an interesting clip from the interview:

It was Bryant’s fourth championship and the most satisfying, because it was his first without longtime teammate, archrival, and overall irritant Shaquille O’Neal. (Shaq had publicly mocked Bryant for failing to win without him, chanting in a bizarre karaoke rap: Kobe, tell me how my ass taste?) Now that he’s shut Shaq up, Bryant can look back on their time together with newfound perspective. “The biggest mistake I made was responding to what he was saying about me. Once I responded, now that made it seem like I was part of that whole thing. It’s like, Okay, these two are against each other. As opposed to just staying quiet, which is what I’ve been doing the last few years. Let him say what he needs to say.”

Can he look to the future with the same serenity? Can he imagine a day when he and O’Neal, retired and mellowed, will sit down to a quiet dinner, bury the hatchet—reminisce?

“No!” he shouts. He wrinkles his nose as if the suggestion is not only distasteful; it downright smells bad. Not that he still harbors ill feelings, he adds quickly. He’s just not that kind of guy. Linger over dinner, sipping wine-talking? That’s not his style. “I’m not a big reminiscer,” he says.

Not that I really have any bearing on these MULTI-MILLIONAIRES argument, but I will bring to recollection that Kobe, during his rape trial, parted his mouth to talk about Shaq’s alleged extra-marital payoffs.  If that’s not enough to slap a dude I don’t know what is!  He’s a great ball player. Questionable associate at best. 2 cents.