The list of names for Michael Vick’s summer football camp is longer and more impressive.

Add Minnesota star running back Adrian Peterson, Philadelphia quarterback Donovan McNabb and running back LeSean McCoy and Atlanta receiver Roddy White to the list for the camp that runs June 23-25 at Hampton University. 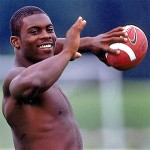 My name is Aundre Lowe I attend Heritge High School. I am six foot one and I play football, basketball, and baseball. My ticket out of Lynchburg to make something of myself is football i play linebacker and quarterback or anything the coach desires me or needs me to play.