Professional golfer Jim Thorpe, who has won more than $15 million in his career, was sentenced to one year in prison for failing to pay federal income taxes for three years.

Thorpe’s request to avoid prison time was rejected Friday by U.S. Magistrate Judge Karla Spaulding in Orlando, Florida. The former college football player pleaded guilty in September to two counts of tax evasion for failing to pay more than $2 million in personal income taxes for 2002, 2003 and 2004.

Allowing the golfer to avoid prison would send a signal that only “poor people should go to jail” if they fail to pay their taxes, Spaulding the judge said.

In a 37-year career, Thorpe has won three times on golf’s PGA Tour and has 13 victories on the over-50 Champions Tour, according to the PGA’s Web site. The athlete played football at Morgan State University in Baltimore before joining the pro-golf circuit.

“I never tried to beat the Internal Revenue” out of taxes, Thorpe told Spaulding today. Still, he acknowledged the failure to pay taxes was his fault. As part of his sentence, Thorpe agreed to pay back taxes. 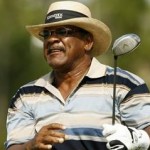