Michael Vick to Host Football Camp at Hampton U.

Michael Vick will host a youth football camp at Hampton University next summer that’s expected to include several other NFL players as guest counselors. 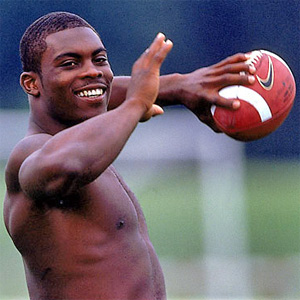 Details are still being ironed out, but the camp will be for players age 8 through rising high school seniors. It will take place over several days and will be an overnight camp. It’s tentatively scheduled for mid-to-late June.

Tommy Reamon, Vick’s former coach at Warwick and now the head coach at Virginia Beach’s Landstown High, is assisting Vick in putting together the camp. He said that dates, cost and guest counselors are likely to be finalized in February.

Reamon said that they are trying to avoid conflicts with other events at Hampton University, as well as other football camps that may take place locally, where possible.

“We’re very grateful that Hampton University and Dr. (William) Harvey were interested in helping us with the camp and allowing Michael to give back to the community,” Reamon said.

5 responses to “Michael Vick to Host Football Camp at Hampton U.”