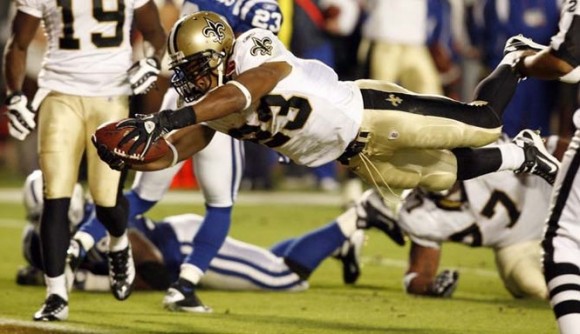 Who Dat! Who Dat….would have ever pick the Saints to beat the Colts? Well that’s why they play the game. The New Orleans Saints have been a bottom basement NFL Team for a long time. We all have seen those images from NFL Films with Saints fans draped with bags over top of their heads, well no more. The New Orleans Saints have won Super Bowl XLIV in a thrilling victory over the Indianapolis Colts, 31-17.
With all of the media hype (Tony Dungy) of a Colts blowout victory, the Saints would have none of it and scratched and clawed throughout the game. They were not afraid of the Legend Of Peyton Manning and played aggressively, took risks and went out and left it all on the line.


This fierce passion was most evident with the first ever second half onside kick. The call from head coach Sean Payton took the guts of a thief, and it paid off immeasurably. The Saints never really relinquished momentum after came the Saints came out of that pile with the football. And when Peyton Manning threw that interception for a pick six, all of the Who Dat nation yelled BALL GAME in unison.

We just got treated to our third straight classic Super Bowl. Two years ago, the Giants shocked the world by edging the Patriots. Last year, the Steelers and Cardinals went back and forth in a nail-biter, and this year, the Saints and Colts fought tooth and nail for 60 minutes. The final score might not show a thriller, but this thing was hotly contested until very late in the game. Things turned on one major mistake.

The fact that it was the Saints who won adds to the feeling that we just saw greatness. Between the years of miserable football and what they and their fans went through with Hurricane Katrina, it feels great to see them on top. I wish I had some Bourbon on Bourbon Street right now!

I know Mardis Gras is going to be bananas this year! I know AlumniRoundup will be there to join the fun. Congrats New Orleans….You Deserve It!