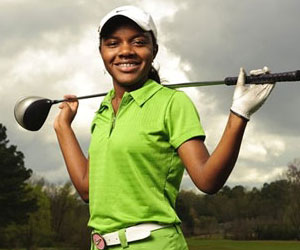 For black athletes, their sport of choice doesn’t usually involve a golf club. In the sport of golf, outside of Tiger Woods, African-Americans are nearly non-existent. However, there’s a new hope shining for a young girl name Mariah Stackhouse.

According to a report from the Associated Press, at just 15, young Stackhouse the brightest young African American climbing the American Junior Golf Association’s national rankings. Already, she’s ranked #29 among female rankings, and #33 among all girls and boys.

Playing golf is something she’d love to do professional if given the chance. However, there’s man obstacles she’s faced thus far and will continue to face, especially as an African American.

“It’s a big financial investment and a huge sacrifice,” her father, Ken Stackhouse, told the AP. “I’ve known (African-Americans) who played before us, and their concerns were always the same. They never really got all the support they needed financially. As a consequence, they were never able to rise to the level Mariah has. Fortunately, she had support early enough to make a difference.”

So far, for Mariah, her father has provided not only financial support, but also encouragement into the sport from a very young age.

A self-proclaimed “daddy’s girl,” the aspiring golf pro was taught the game of golf by her father, beginning at the age of 2. Thanks to Ken’s job in the residential construction and design business, it’s allowed him to take time off to take Mariah tournaments during the spring and summer.

Obviously, he says they’re lucky to have that kind of freedom. However, without an outside hand, they admit that Mariah may have never come as far as she has.

A local Atlanta-area pro, King Simmons, allowed Mariah to hone her skills on several Atlanta city courses, free of charge. Then, former Olympic gold medal winner Ralph Boston met Mariah and her father at a local tournament by chance. Impressed by their passion for the game, he referred them to a golf course owner where he plays himself as a member. In doing so, Mariah was given time, without the cost, to practice and play on high-quality course around the city.

Normally, a top-level junior golfer can spend as much as $35,000 a year for course time, equipment, coaching and travel expenses. But, thanks to the help she’s received along the way, Mariah has been able to pursue her golf dreams.

While her father handles most of the teaching, she sees a swing coach once a month. This has also helped in keeping all the costs of golf career down as well, because most amateurs spend big money attending prominent golf academies.

“We still get literature all the time from those camps, but we never did any of that,” Ken said. “We just worked. All the guys always compliment Mariah on her work ethic. She works hard.”

According to Mariah, she remembers the day she realized a career in golf was attainable. Recalling the say, she tells the AP that it came at around 5 or 6 years old, when she had just returned from time spent with her grandparents.

“When I went out on the range, I was hitting my 5-iron,” she said. “I don’t think I ever hit a club that good, and I had not hit a club in three weeks. I just came back and was hitting it so perfectly. I remember my dad saying, ‘Wow, you’re pretty good.'”

While Mariah definitely has a bright future ahead of her, there are no guarantees she’s become just the fourth African-American woman to play on the LPGA. But, she’s just in ninth grade. However, her father still considers that either way, she’ll play a significant role in luring in other minorities to the white-dominated sport.

“She could do a lot for women, but particularly African-American women, by inspiring them to get more involved in golf,” Ken Stackhouse said.

Mariah, on the other hand, doesn’t weigh herself down with those types of thoughts. She just focuses on the game.

“I don’t really think about it,” Mariah said. “I just love to play golf.”

Good luck to Mariah-she sounds like she has a terrific future in golf. I'd be interested in knowing more about her-her academic standing, her Mom, siblings., etc.

It sounds like her Dad, like Earl Woods with Tiger, is doing a great job in helping her develop.

HELLO I AM MARIAH FRIEND SHANETT. I HAVE KNOWN HER SINCE 4TH GRADE AND WE ARE NOW IN THE 1OTH. IVE KNOWN HER TO BE DETERMINED AND ALWAYS MOTIVATED IN EVERYTHING SHE DOES. SHE IS AMAZING ALONG WITH HER FAMILY. I PERSONALY LOVE THEM. HER MOM, DAD, AND EVEN HER LIL BROTHER ARE ALL SUPPPORITVE TO MARIAH AND ARE GREAT PEOPLE TO BE AROUND. AND I KNOW MARIAHA STACKHOUSE IS GOING TO BE THE NEXT TIGER!!!!!!!!!!!!!!!!!!! I WILL ALWAYS BE HER FRIEND, FAMILY AND FAN!!!!!!!!

Hello! my names Amani Jaramoga and im fifteen as well, I recently decided to take up golf. Im doing pretty well so far and if I keep this up i’ll be seeing you soon so keep doing well and I might just have competion.