West appeared on a massive red and maroon apple float, with imagery of skyscrapers wrapped around it to resemble a city and performed his song “Lost in the World.”

Kanye West was clad in all black leather pants, draped in gold chains, wearing a full length fur vest with his arms exposed.

He also donned black sunglasses and a black headband.

It appeared that Kanye West’s garb was meant to pay homage to the native people of America, as a tribute to the Thanksgiving Day holiday being celebrated in the country today.

Kanye’s choice of fashion and not his performance was the most talked about on Twitter immediately following the high-profile rap star’s performance. 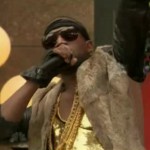