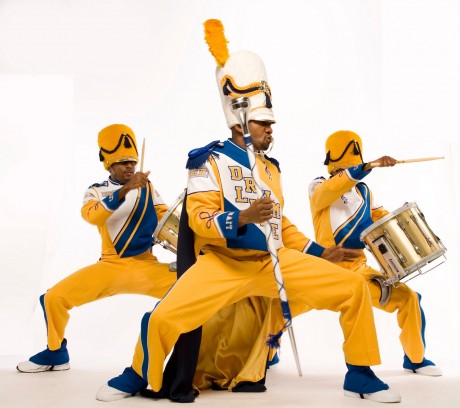 The thundering live phenomenon spun out of the 2002 feature film Drumline will march into NJPAC’s Prudential Hall on Friday, October 26, 2012 at 8:00 p.m., taking audience members on a time-traveling voyage of the origins of Historically Black College and University (HBCU) marching bands from Africa to present day.

Tickets are $20-$80 and are available by telephone at 1-888-466-5722, at the NJPAC Box Office at One Center Street in downtown Newark, and at www.njpac.org. To purchase tickets for groups of 10 or more, call 973-297-5804. The performance is made possible in part by The Horizon Foundation for New Jersey, Bloomberg, Women’s Association of NJPAC, Discover Jersey Arts and the New Jersey State Council on the Arts.

Released in 2002, the Drumline feature film starred Nick Cannon as a talented but over-confident drummer who struggled to find his place within the band. The charged performances and the unique depiction of life and tradition in an HBCU marching band were at the heart of Drumline, and it was those characteristics that the film’s executive band consultant, Don Roberts, brought to the live show.

Since its inaugural run in 2009, Drumline Live has incorporated an educational experience into this showcase with free improvisational of jazz, boisterous gospel vocals and the heart-pounding sounds of the drum section. “They covered the history of the tradition marching band experience of Historical Black College and Universities (HBCU) with energy and style,” said Urban Life and Style.

The big-screen feature film Drumline dramatized the marching band tradition of historically black colleges and universities. This explosively choreographed production, created by the musical team behind the movie, moves era by era through history, with percussion and brass renditions that run the gamut from R&B and jazz to soul-powered interpretations of Top 40 hits and all-new compositions — plus those improvised drum riffs and high-energy drumline challenges that provide the heartbeat of this tradition.

Located in the heart of an emerging downtown Newark, NJPAC has been widely cited as a catalyst in the revitalization of New Jersey’s largest city, attracting more than seven million visitors since it opened in 1997.  NJPAC’s arts education initiatives have reached more than a million Newark and New Jersey children with innovative programs including the Wells Fargo Jazz for Teens, The Star-Ledger Scholarship for the Performing Arts, The Young Artist Institute, and the Verizon Passport to Culture SchoolTime and  Series. NJPAC also offers in-school residencies in dance, theater, music, and the literary arts. The cornerstone of Newark’s cultural community, NJPAC’s free outdoor summer music series, Sounds of the City, is an annual highly anticipated event, attracting between 2,000 and 3,000 people to the three-acre Theater Square on Thursday nights during the summer months. To learn more, visit www.njpac.org