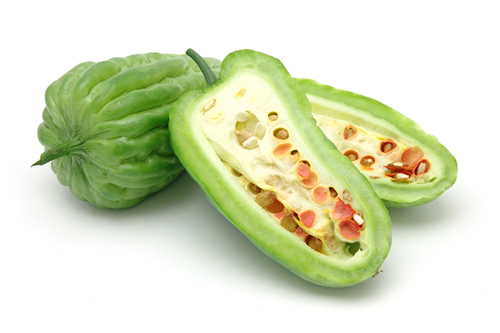 All over Jamaica, the cerasse bush (Momordica charantia) grows wild, unaided by human device. Though it produces bright, yellow flowers and an orange-coloured fruit, it is often viewed as no more than a nuisance, creeping through the garden. Tea brewed from the leaves is popular among rural folk but considered too bitter by most Jamaicans.

Traditional Indian, Chinese and African pharmacopeia, however, for centuries have appreciated the value of this vine-type plant ­ cerasse (also called Bitter melon, Karela, Balsam pear) has pride of place as a laxative, anthelminthic and an abortifacient. Reports are that even in some of the most modern hospitals in India, cerasse is dispensed ­ so confident are their doctors about the herb’s positive effects on diabetics.

In more recent times, scientists have identified and extracted several active proteins from cerasse including MAP-30, alpha-momorcharin and beta-momorcharin which have indicated putative value as anti-HIV agents.

The series of proteins ­ alpha and beta momorcharins ­ were isolated by the researcher T. B. Ng at the Chinese Medicinal Material Research Centre of the Chinese University of Hong Kong and he found that these proteins have anti-HIV activity. Alpha momorcharin was also found to be an abortifacient and tumuor suppressive.

More recently Sylvia Lee-Huang, a biochemist at the New York University (NYU) School of Medicine, extracted another protein MAP-30 (momordica anti-viral protein of 30 kDaltons) which also has anti-HIV activity. It appears, according to Lee-Huang’s work, that MAP-30 can block the infection of T-lymphocytes and monocytes by HIV and can also inhibit the replication of HIV in already infected cells in vitro. The research also indicates that MAP-30 appears to have limited toxic effect on the uninfected (healthy) cells.

For anti-HIV ‘treatment’, the cerasse is liquefied and consumed either as a juice or as a retained enema. Unripe fruits, seeds, leaves and stems of the plant are used interchangeably to obtain the juice. No carefully-monitored clinical trials using the herb as treatment for HIV/AIDS could be found but the literature documents research (Zhang, 1992) of individual cases where cerasse is reported to have improved CD4 count (in blood) of patients with HIV. (The HIV infects CD4 cells, preventing them from functioning normally ­ that is, helping the body’s immune system to fight infection. As HIV/AIDS progresses, the number of CD4 cells decreases; normally there are about 800 to 1,200 CD4 cells per cubic millimeter of blood.)

This patient, who lived in Los Angeles at the time, shared his experience with cerasse, and about 100 other persons living with HIV/AIDS in that city went on the herb.

If cerasse passes the test under well-structured clinical trials, this could have wide implications for HIV treatment especially in developing countries where the prevalence rate of HIV/AIDS is dramatically increasing, cerasse is ubiquitous and scarce funds cannot be allocated to purchase the expensive anti-retroviral drugs now on the market. Who will take up the challenge of further research?
By Eulalee Thompson – The Jamaica Gleaner

I am happy to hear about the superb benefits of this tea, I disliked as a child. Growing up in Jamaica, I always knew it tasted like medicine. Back then it was like punishment, to me. Thanks for making this publick knowledge.

Hi HI First time bounded here on your site, founde on ASK. Thank you for your advice. I will try it.

I agree… green tea will give you energy.. its like whole wheat bread compared to the analogy of coffee.. green tea is just the best legal stimulant booster 🙂

Leave a Reply to Reconnect: With Your Health – 2009 | KC Urban Farms and Gardens Tour Cancel reply