Mary Crawford has plenty of reasons to be proud of her daughter.

Despite getting pregnant in high school, Crawford’s daughter didn’t miss a day of school and managed to graduate. She earned a degree in communications from Howard University.

When Mary Crawford’s son, Steven, was imprisoned for a murder he didn’t commit, her daughter wrote letters and contacted whoever she could in an effort to help free him.


Crawford’s daughter is Linda D. Thompson. On Jan. 4, Crawford will have one more reason to be proud of her daughter. On that day, Thompson will be sworn in as Harrisburg’s mayor.

When that happens, the 49-year-old Thompson will become the first woman — and the first African-American — to lead Pennsylvania’s capital city. In the Democratic primary, she defeated Mayor Stephen Reed, who has been in office since 1982. She bested Republican Nevin Mindlin in November. 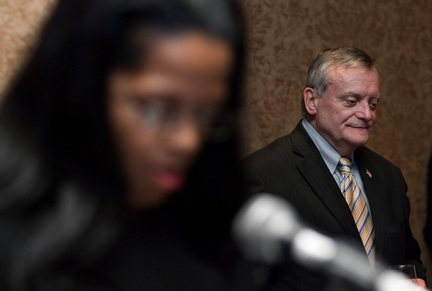 For those reasons, The Patriot-News has chosen Linda D. Thompson as the 2009 Newsmaker of the Year.

The 78-year-old Crawford described her daughter as “a fighter.”

“Of all of my children, she was the most ambitious,” Crawford said. “If she sets out to do something and doesn’t get it the first time, she’s going to keep on fighting for it.”

That’s part of the Linda Thompson that residents have come to know during her time on Harrisburg’s City Council. But there is much more to the next mayor than what the public sometimes sees.