The Your Child Left Behind Act 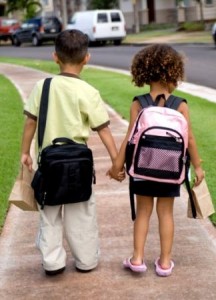 The No Child Left Behind Act of 2001 is an educational reform package. It is open to some interpretation by each state, but the basics are: 1) every American student becomes proficient in math and writing by 2014, and 2) to eliminate and “achievement gap” that exists between children.

The premise of 100% proficiency is absurd. Not only is it unattainable, it undermines much needed science and social studies programs because those aren’t being tested.

Schools that meet NCLB standards are rewarded with federal funding and monetary rewards for their teachers, while schools that fail to meet standards are publicly shamed and threatened with closure or state-takeover if they fail perennially. What ends up happening is, administrators cheat and subvert the system in order to save their jobs and keep the school meeting the NCLB standards. For example, I had students suspended from school on test day – not ironically, the ones who were the worst test-takers. I saw kids transferred to other schools before the test, and transferred back into the school after the test. It has encouraged some really unscrupulous and downright despicable behavior on behalf of adults that are supposed to have children’s best interests at heart.

In classrooms, the regular curriculum has been replaced with simply teaching children how to pass the standardized test. Teachers are discouraged from being creative in lesson planning or teaching students real translatable skills such as consistent nightly study, how to use and interpret a textbook, organization and planning, and learning creative ways to understand and impart information. The kids are being beaten over the head with bubble-filling and mindless exercises that don’t prepare them for the rigors of high school or college.

NCLB also uses a single standardized test as its sole determinant for school proficiency. In other words, it uses a quantitative assessment (scores determined by which bubbles children have filled in on math and reading tests) to rate a qualitative phenomenon (the quality of education that a school is providing for those children). The idea that students who fill in the right bubble consistently in two subjects can accurately indicate how well children are being educated at an institution is asinine.

Finally, teaching kids to fill in bubbles on math and reading tests does absolutely nothing to address the “achievement gap”. Only through a pedagogy that is culturally relevant and designed to specifically address the mis-education of Black and Latino children that has occurred will that educational debt be repaid.

4 responses to “The Your Child Left Behind Act”