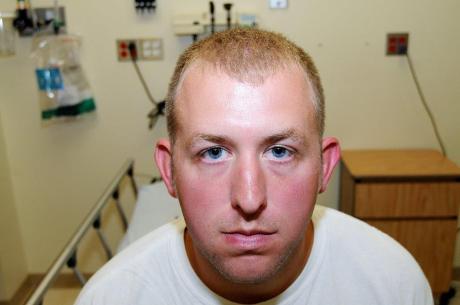 I don’t know whether Darren Wilson is a racist. Or a White supremacist. It doesn’t matter. The fact that he will never face a trial by jury for killing Michael Brown is a victory for White supremacy all the same.


White supremacy is an ideology. It is based upon the belief that White culture and “Whiteness” are superior to other cultures and races of people. It also includes the idea that the opposite of Whiteness is “Blackness”, which positions Black culture and Black people as inferior to all others. One important White supremacist notion is that Black people are inherently and unavoidably dangerous. Large Black men like 6’ 4” 292lb. Michael Brown are assumed to be an imminent threat to everyone around him. Whether he was a threat to Darren Wilson on August 9th, 2014 is completely irrelevant. Because our country operates on a White supremacist foundation, its justice system, and the majority of its people will be convinced that Brown deserved to be shot and killed. Michael Brown’s size and ultimately his Blackness imbued him with superhuman strength and a superhuman criminality, weapons allegedly far more dangerous than the gun Darren Wilson carried.

It was 157 years ago when the Supreme Court of the United States declared that:

“In the opinion of the court, the legislation and histories of the times, and the language used in the Declaration of Independence, show, that neither the class of persons who had been imported as slaves, nor their descendants, whether they had become free or not, were then acknowledged as a part of the people, nor intended to be included in the general words used in that memorable instrument…They had for more than a century before been regarded as beings of an inferior order, and altogether unfit to associate with the white race, either in social or political relations; and so far inferior, that they had no rights which the white man was bound to respect; and that the negro might justly and lawfully be reduced to slavery for his benefit.”

Those were the words of Chief Justice Roger Taney in the wake of the Dred Scott case (Scott v Sandford). He declared unequivocally that our country never intended for Black people to be considered human beings—much less citizens—while on American soil. Dred Scott, a Black man from Missouri, was relegated to the status of “property”; not a human, but a “slave”. And for his benefit. Today, a Black man form Missouri was relegated to the status of “thug”; not a human, but a “nigger”. Whether they called him one or not, the justice system treated him like one. That’s far worse.

A cornerstone of racism in the United States is the use of White supremacy to systematically and systemically enforce White cultural supremacy and Black inferiority. Conversely, we’re consistently taught that a “racist” is a person who uses one of seven or eight naughty words to describe people’s race. I couldn’t care less. I’ve often told people that you could put Ben Chapman outside of my apartment and have him call me a nigger to and from my car, while I’m getting my mail, and while I grill my food. It would be annoying as hell, but I would trade dealing with that “racism” for fixing the real racism that causes the schools in my southern Seattle community to mis-educate the Black, Brown, and Yellow kids they overwhelmingly enroll, or that causes the disproportionate unemployment that affects minorities in my community. That racism is real. It’s a problem. Name-calling is not.

Racism is the reason why Michael Brown’s criminality went on trial instead of Darren Wilson’s. And the grand jury’s failure to even put Wilson on trial is the latest in a long line of events reminding us that Black lives are forfeit in the face of White supremacy in our justice system. I know many try to argue that justice isn’t biased against colors of skin, but is biased towards green. The implication is that the remedy for a corrupt justice system is to buy your own slice of the iniquity. I’m not into finding solutions that don’t answer fundamental problems, so that’s a non-starter.

While Robert McCulloch was telling the world about the victory for White supremacy in Missouri, I was at work tutoring. I was helping college students in a sociology class learn how racism, classism, and chauvinism undermine equity and justice in our society. A Black man teaching a group of young White men that part of responsible citizenship is ensuring fair treatment and opportunity for everyone—especially those who are currently impugned by systems designed to relegate them to less-than-human status.

White supremacy and racism continue to rot the very core of our country. But little by little, those of us fighting for social justice are finding ways to cure the infestation. It is one way we can do our part to get justice for Michael Brown, when our justice system will not.