This story is close to my heart as a graduate of Howard Engineering. When my classmates and I were pushing to get the hell outta there with degrees, the Engineering Library was a “24 hour Karate School.” Asking the students to lock the doors is not a viable solution as it prevents folks from reaching their study groups.

The only viable solution would be some form of access control system or a live guard.

Both of these cost money. 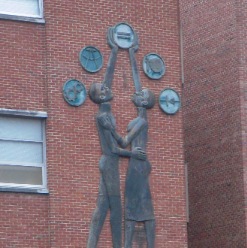 University police say four masked men confronted students at about 3:30 a.m. inside the engineering building and demanded their personal belongings. D.C. police say nine more robberies occurred nearby between then and 6:30 a.m. The assailants seemed to target men and took cell phones and other personal items.

The university has issued a campus security alert. Officials are asking students to make sure building doors are secured and to report anything suspicious.