A lot can happen in one year. For instance, in one year a baby takes its first steps and its first teeth begins to sprout.

Similarly, in Haiti, a lot has happened in one year, but not for the better. One year later after the January 12th earthquake killed an estimated 250,000 and left 1 million Haitians living in tent cities, cholera has been allegedly introduced to the country by the UN’s Nepalese troops to have killed an estimated 3,300 and affected another 120,000. One year later and more than half of the international dollars pledged for Haiti’s rebuilding has yet to be delivered supposedly because much of the rubble left from the earthquake’s aftermath is still unmoved, and the rebuilding can’t start until the debris is removed. One year later and political instability seems to be like a disease crippling the country, and what’s supposed to be the country’s efforts towards electing the next leader of the country is turning to be a circus of elections violence and reported corruption. One year later and the country’s former dictator, Jean Claude “Baby Doc” Duvalier, has unexpectedly returned to the country after being in exile for 25 years.

One year later, one thing is for sure: all eyes are still on Haiti and the cameras haven’t left as was predicted, but mainly because the Haiti story just keeps getting even more juicy. But what I wish the cameras would show is the other 90% of the country, because Port au Prince is just the capital and not the entire country. What the cameras would see is that life goes on in Haiti, and that while 1 million are living in tent cities, the other 9 million is living life as they knew it pre-January 12, 2010. 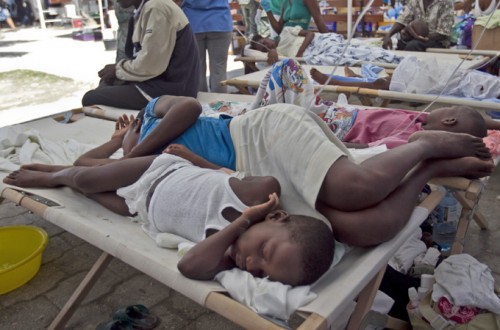 What the real story would reveal is that while all the hoopla has been on Duvalier’s mysterious return to Haiti since Sunday night (January 16th), the people are calling for a return of Haiti’s first Democratically elected President, Jean Bertrand Aristide, who was ousted in a U.S.-orchestrated coup in 2004 and forced into exile in South Africa, even though such ‘kidnapping’ has always been denied by the U.S.

On March 1, 2004, US Congresswoman Maxine Waters (D-CA), along with Aristide family friend Randall Robinson, reported Aristide had told them that he had been forced to resign and had been abducted from the country by the United States and that he had been held hostage by an armed military guard (http://www.democracynow.org/2004/3/1/rep_maxine_waters_aristide_says_i).

Rep. Charles Rangel, D-New York expressed similar words, saying “As a matter of fact, he was very apprehensive for his life. They made it clear that he had to go now or he would be killed.” (http://edition.cnn.com/2004/WORLD/americas/03/01/aristide.claim/)

A 2005 Wikileaks cable documents the US government “insistence that all efforts must be made to keep Aristide from returning to Haiti or influencing the political process.”

Needless to say, everything that has ever happened with Haiti has always been strategic regardless of who the current puppet master is. Likewise, it’s very strategic (and suspicious) that Baby Doc would return at such a time especially with Haiti’s impeding elections and would even be allowed to return back to Haitiby the international community. In the same way, Haiti’s progress post-earthquake is also very strategic, and what awaits the other side of the curtain once some type of rebuilding is actually completed- that’s also pretty strategic.