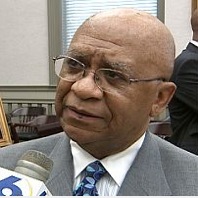 “Mister Speaker: I rise today in support of H. Res. 1087, a resolution honoring the life of my good friend, Judge Jack Ruffin of Augusta, Georgia. Judge Ruffin passed away on January 29th at the age of 75. He had a long and distinguished career of service in Georgia, and he’ll truly be missed.

“Jack Ruffin was born in the middle of the Great Depression and spent his formative years in the town of Waynesboro, Georgia. He left home to attend Morehouse College, and graduated in 1957. At the time, his mother wanted him to be a teacher, but Jack Ruffin had other plans. He moved to Washington, D.C., attended Howard University School of Law, and got his J.D. degree in 1960.

“Jack Ruffin could’ve built a successful law practice anywhere in the country, but he decided to return home to the deeply segregated city of Augusta to practice law. Throughout the course of his career, Jack Ruffin focused on rooting out the racial prejudice and discrimination which still held a firm grip on the political and economic life of our state.

“Jack Ruffin fought for his own right to practice his profession, and became the first black lawyer admitted to the Augusta Bar Association, and the first black Superior Court Judge in the Augusta Judicial Circuit. More importantly, he fought for the rights of everyone in the community. Among other causes he took on, he was the lawyer who desegregated the Richmond and Burke County public school systems.

“Judge Ruffin was appointed to the Georgia Court of Appeals in 1994. He became the first black Chief Judge of that court in 2006. After his retirement in 2008, Judge Ruffin spent the remainder of his life teaching students at Morehouse, giving back to the college that gave so much to him.

“The resolution before us today honoring Jack Ruffin’s life is sponsored by every single member of the Georgia congressional delegation. That speaks not only to Jack Ruffin’s character, but also to how far we’ve come as a state, and as a nation. Jack Ruffin did as much to change the laws and attitudes in Georgia as anyone else of his generation. As a result, we’re a better and a freer people.

“So, today, I urge my colleagues to adopt this legislation to express our lasting gratitude for Jack Ruffin’s unyielding commitment to justice and equality for all.