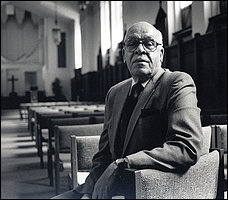 Lawrence N. Jones, 88, a longtime minister and religious administrator who was dean of Howard University’s divinity school for 16 years, died Dec. 7 at his daughter’s home in Atlanta. He had cancer.

Dr. Jones, a minister in the United Church of Christ, was pastor at churches in Ohio, New York City and Washington during a career spanning four decades. He was dean of the chapel at Nashville’s predominately black Fisk University in the early 1960s and then held several top positions at Union Theological Seminary in New York before overseeing Howard’s divinity school from 1975 to 1991.

During his tenure at Howard, increased enrollment made it necessary for the school to relocate twice to larger facilities. Enrollment was reportedly at 238 when he stepped down, more that double from when he began.

In the Washington area, he was a past board chairman of the Samaritan Inns, which provides halfway houses for the homeless.

Survivors include two children, Lynn Huntley of Atlanta and Rodney Jones of New York; four grandchildren; and a great-grandson.