Here’s what YOU had to say (Apple are you listening):

I have a Kindle so I have the book reader (from unexpected disposable income) which I am loving by the way! It looks too large to me also. You may as well use a laptop it seems. AND a monthly fee!” -Corinthia

“Don’t buy this now give it a year and there will have even better functionality and the price will come down. Plus by that time they will work out some of the bugs that come up by then.” -Roderick

No phone. No camera. No webcam. No Flash. No USB. Apple just created the 2010 version of the LaserDisc. $$ #ifail -@GBattle

Jamahl said: No for a few reasons.
1) Tablets aren’t for me. I think they are a great invention for the medical field….where they have been for some time now (stop acting like you invented the wheel apple)
2) This really is a giant iphone. You still have to use the app world to get anything onto the tablet and it used the same design and user interface software. This also means lack of customization and limited inovation (staples of apple)
3) 64 GB max memory with no option to add more…
4) Lack of a removable battery for a device that is sure to be power hungry
5) Lack of multi tasking ability….where is Luke Wilson when you need him.
6) Internet service plan is 30 dollars a month…on AT&T so you know you are paying for trash.
7) The reviews I have read had it coming in closer to 4 lbs, and with that horrible design ( could you please put some grips on the side of it…was that too much to ask?) it will likely be something you wont want to just carry around.
8) Its serves no real purpose outside of being an ebook reader..you can get that for cheaper anywhere else.

Meh…i thought Apple was going to put me on. like an idea that would make some other technology obsolete. –@BillyOcean_

I have to tell you I LOVE my apple products (MacBook, Ipod, Airport) and I feel like Apple is always pushing the envelope. One thing that any Apple customer know by now however is that with pushing the envelope comes the risk of your purchase becoming obsolete quickly. Case in point, my MacBook Pro is 1 year old. It was in the early releases of the aluminum body models. When I first purchased it I quickly found out the pros and cons and the one inconvenience I noticed was the lack of an SD reader. Next thing you know, there’s a new model with guess what, an SD reader. To top it off its the same price with a better battery.

This is Apple’s business. Innovation. The ipad I’m sure will encounter several firmware updates in it’s time, but these first models still have no camera, no USB etc. Also I’m not sure I’m ready to take on yet another monthly data plan bill on top of the ones on every cell phone in my household.

My 2 cents says hold for now. But that’s just MY view. Here’s what you guys said online… 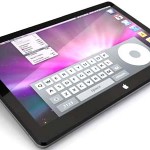 Not feeling the IPad.. ITs a real obvious move to compete with the E-Reader market, but it ends up just being an oversized Ipod Touch

You guys must not like or have an ipod touch… The internet experience on the Touch is better than on my laptop. If I have to move about the house I’m taking the touch before the laptop. So being able to have a larger screen would be that much better. This is not a product to replace the laptop it seems like more of a complimentary product.

There are times when bringing the laptop out is overkill especially when you are really only bringing it to get on the net or some email action… being on the move there are many times and places where it its just awkward to whip out a laptop, find a plug and to lock in to a wifi. But rolling in a meeting and snatching out the ipad to run through some content or a pitch is seems a little more fluid.

eg:How will content design change when the user experience changes from the mouse and the track pad, to two finger navigation? The Content creators will design differently opening up entirely experiences. Thats when the ipad will shine.

So my suggestion is, if you are a creator or early adopter go get it. Learn it and create for it. If you need a gang a ready to go applications hold off.