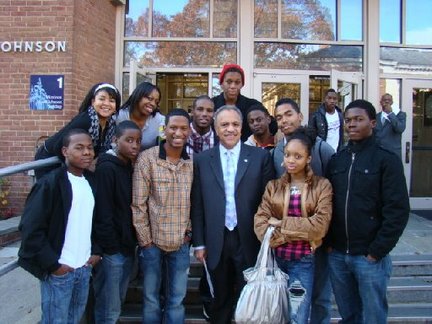 MERCER COUNTY — The trooper in an unmarked cruiser circled the parking lot at the New Jersey Turnpike rest stop near exit 7A. He scanned for a black Mercedes van matching the description provided by a 911 caller who reported it carried three armed men, authorities said.

The trooper soon spotted a vehicle resembling the caller’s description, right down to the partial reading of the van’s license plate numbers. Within minutes after it pulled onto the Turnpike, the vehicle was swarmed by State Police troopers with weapons drawn. The occupants were marched out of the van and into handcuffs.

But instead of weapons, the troopers found 11 frightened Queens teenagers returning from an overnight trip to Washington, D.C.

Listen to the 911 call
[audio: http://media.nj.com/ledgerupdates_impact/audio/reststop.mp3]

The students — all black and Hispanic, ranging from 16 to 19 years old — were returning from a trip to Howard University, a historically black college. They toured the campus and visited classes, then visited landmarks like the Lincoln Memorial and Washington Monument.

The students said a helicopter circled overhead and they were led out of the van by troopers with the guns drawn. They were handcuffed and placed on the side of the road, they said.

“They were truly scared for their lives, without much of an explanation. And we were not given any adequate explanation,” said Molnar. “Was it necessary to cuff everybody, was it a credible complaint?”