Stephen Outing said he got goosebumps today as he looked up and watched three skydivers descending on Broad Street in Newark.

The spectacle was part of the city’s African-American Heritage Parade, and Outing said attending the event has been a family tradition since his grandmother began taking him and his two brothers in the early 1980s.

Now 40 and with his daughters, 4 and 14, in tow, Outing said he recalled his childhood parade experiences as the skydivers floated over city hall. He said the skydivers are still his favorite part of the parade that brings him great pride.

As the parade celebrated its 44th anniversary, police estimated 4,000 people lined the streets to watch the aerial show, city council members dancing on floats and performances by the Navy’s Northeast Band and local high school bands. The parade, with the theme this year of “Ujamaa … Cooperative Economics … We Need Each Other,’’ is the main event of the weekend’s African-American Heritage Festival, which ends Monday.

As Councilman Charles Bell’s float drove down Broad Street blasting the Black Eyed Peas and T-Pain from its speakers, 22-year-old Jasmine Ervin danced with friends on the sidelines.

“I come to the parade for all the high school bands,” Ervin said. “I use to do all of this stuff in high school, and I went to half of the schools in the parade, so I’m here to show my support.”

Parade committee chairman Donald Bernard said putting together this year’s event proved difficult because of the economy. All of the staff is volunteer, and the parade operates with corporate sponsors and partnerships.

“We’re in a climate of economic depression that it’s difficult to get resources to implement this operation on a first-class level,” Bernard said. He added he was grateful for the companies that kept their ties to the parade.

“This parade is important to give young people hope,” he said.

In the 85 degree weather, lifelong Newark resident Patricia Whiteneck sat on the steps of Grace Church on Broad Street and told her son she’s been attending the parade for 24 years.

“This parade is a part of history,” said Whiteneck, 50, said. “African-Americans are always shown in such a negative light, especially in Newark. So it’s important to show the positive contributions, and this parade helps do that.” 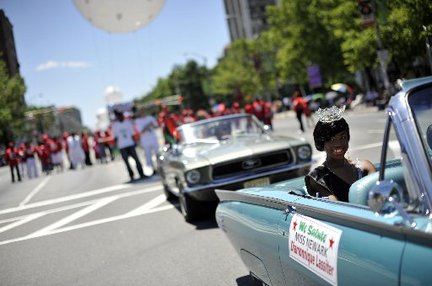