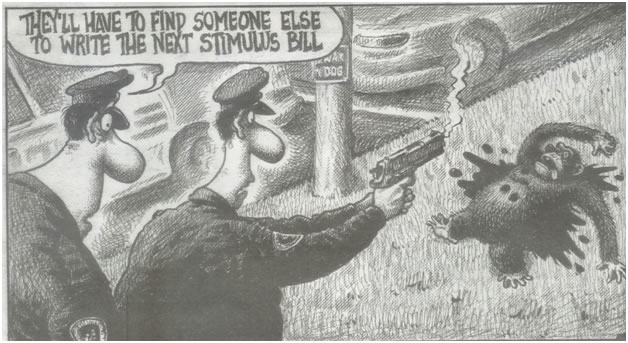 In today’s N.Y. Post..
The New York Post saw fit to publish a cartoon sketch depicting the horrific chimpanzee attack on a woman here in Connecticut.

The cartoon depicts two policemen, one with gun drawn and smoking, standing over the body of a dead chimp.

The cop with the smoking gun states:
…”I GUESS THEY’LL HAVE TO FIND SOMEONE ELSE TO WRITE THE NEXT STIMULUS BILL”

What are we supposed to infer over this cartoon? I will not put any ideas into anyone’s head! I have my opinion, you express yours.

The Roundup is the ultimate forum in which to discuss this expression of freedom of the press, or lack of discretion, common sense or just plain old fashioned racism!

Let’s put this turkey on our uniquely qualified table and let’s carve it as we see fit!!

See the attachment for a view of the cartoon.

0 responses to “NY Post: Prez Depicted as a (Dead) Chimp??? (or Congress perhaps)”