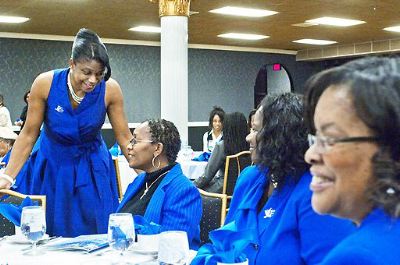 At 82, Helen Hutchinson remains an inspiring, vital and active member of the Prince George’s County chapter of Zeta Phi Beta Sorority Inc. Hutchinson, along with several other chapter members, recently received honors for 25 years or more of service during the chapter’s 60th anniversary celebration.

The county organization, formally known as the Delta Zeta Zeta chapter, has about 50 members and provides four to six college scholarships between $1,000 and $2,000 each year, which have gone to high school seniors and one current college student. The organization raises the money from two annual events, a fashion show and a jazz luncheon, and often teams up with organizations such as the Women’s Action Coalition and the Commission for Women.

Educator and civil rights advocate Theresa Banks, the first president of the chapter, convinced the county to build a library in Fairmont Heights and urged leaders to create a Human Relations Commission, Hutchinson said.

Despite today’s hectic pace and the growing number of community service organizations, Hutchinson says women still seem to have an interest in joining sororities.

“Being a member of a sorority opens new avenues for you,” said Hutchinson, who served two terms as chapter president between 1980 and 1984. In addition to leadership opportunities and the chance to travel across the United States for regional and national conferences, sorority membership fosters friendship and sisterly love.

Hutchinson, for example, still keeps in touch with some of the women she pledged with at Howard University. The members of the county chapter also maintain a strong bond, she said.

“You get to know each other so well, you become almost like real sisters,” Hutchinson said.

Robinson, who’s nearing the end of her two-year term as president, joined the chapter in 1991 after pledging the sorority in 1983 at Hampton University. The chapter, she said, also has sought to tackle ongoing community concerns by providing services to moms and pregnant women, supporting adult literacy and other educational efforts and sponsoring health fairs as well as anti-drug seminars.

Robinson noted that up-and-coming chapter leaders feel much more confident when long-time members such as Hutchinson stand strong with them.