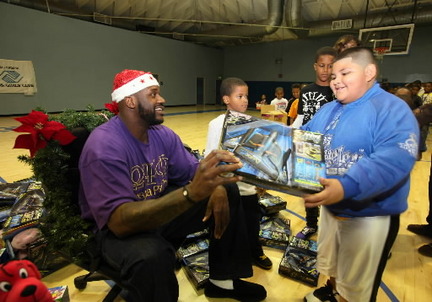 Continuing a tradition he began at his mother’s urging — OK, insistence — in 1992, O’Neal (aka Shaq-A-Claus) spread good cheer to about 400 adults and children with a variety of gifts and, more important, smiles, hugs and handshakes for some who don’t get nearly enough of those. Not one of them seemed to mind he was missing the fuzzy red suit and all those reindeer.

After the Cavs practiced at UCLA on Thursday afternoon, O’Neal made his way to the Challengers Boys & Girls Club in South Central Los Angeles. An hour before his arrival, a huge traffic jam clogged the streets around the club as parents dropped off their children for the kids-only event.

“Children were selected based on attendance, attitude, behavior and grades in school,” said Challengers President and CEO Corey Dantzler, whose father, Lou, started the Challengers in 1968.

A Boys & Girls Club alum, O’Neal has had a longstanding relationship with the organization. In 1998 he pledged $1 million to help build technology centers in clubs across the country. He also collaborated with BGCA and Microsoft to create an online safety program for kids.

But Thursday afternoon was all about fun. The 150 extremely well-behaved children ate lunch donated by Wendy’s and played a few athletic contests on the playground while awaiting O’Neal. When he pulled up in a black Mercedes, squeals erupted, but the children held their places under some awnings to shade them from the late-afternoon sun.

With little fanfare, O’Neal, accompanied by three of his children, took his spot in a black leather swivel desk chair in the middle of the gym floor and began handing out airplanes, Care Bears and Hannah Montana dolls, all donated by Jakks Pacific and Toys R Us. Although the youngsters left beaming, the biggest smile belonged to the big fella in the sequined Santa cap, jeans and a purple Omega Psi Phi T-shirt, who said he couldn’t imagine Christmas without this ritual.

“I know you’re going through some tough times,” O’Neal told the guests, “but keep smiling and believe in God.”

With that, he began handing out bags filled with toys for the children and toiletries for their moms.