African-American slaves sweated in the summer heat and shivered in the winter’s cold while helping to build the U.S. Capitol.

Congress took note of their service and sacrifice Wednesday by erecting commemorative plaques inside the Capitol in their honor. Lawmakers said the memorials will ensure that the contributions of slaves in building one of the world’s most recognizable buildings are never again forgotten.

“In remembering the slaves who labored here, we give them in death some measure of the dignity they were so cruelly denied in life,” Senate Republican leader Mitch McConnell of Kentucky said at the plaques’ unveiling.

The plaques read: “This original exterior wall was constructed between 1793 and 1800 of sandstone quarried by laborers, including enslaved African Americans who were an important part of the work force that built the United States Capitol.”

Lawmakers have been looking for ways to honor the slaves who were used in the construction of government buildings, including the Capitol and the White House.

Rep. John Lewis, D-Ga., a former civil rights leader who chaired a congressional task force that studied the contributions of slaves to the Capitol, told onlookers that the plaques help reveal a part of the Capitol’s history that has been overlooked by many.

“Imagine, in Washington’s oppressive summer heat and humidity, to chisel and pull massive stones out of a snake- and mosquito-infested quarry,” Lewis said. “Imagine, having to fight through the bone-chilling winter in rags and sometimes without shoes. Just imagine, the United States government paying your owner, not you, but your owner $5 a month for your labor. This Capitol, the most recognizable symbol of our democracy, was not built overnight, it was not built by machines. It was built through the backbreaking work of laborers and slave laborers.”

House Speaker Nancy Pelosi and Senate Majority Leader Harry Reid, along with their Republican counterparts McConnell and House Republican Leader John Boehner, unveiled the plaques inside the Capitol’s historic Mansfield Room. They will next be placed in the Congressional Visitor Center; its largest room is called “Emancipation Hall” in honor of the slaves’ work on the Capitol.

Historians have discovered that slaves worked 12-hour days, six days a week on the construction of the Capitol. The federal government rented the slaves from local slave owners at a rate of $5 per person per month.

In addition to working on the building, slaves worked in quarries extracting the stone for the Capitol. Other slaves provided carpentry skills, still others worked at sawing stone and timber.

Slave women and children were used to mold clay in kilns. 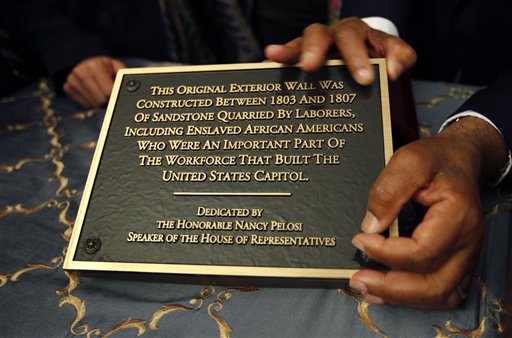