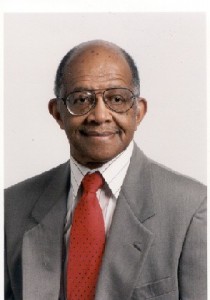 A memorial is planned for 1 p.m. Feb. 8 at Grace Episcopal Church in Tampa. A second one will be held in Washington (location TBD) the week of Feb. 14-15.

Dr. Lionel C. Barrow, Jr. is professor emeritus, Howard University School of Communications. He graduated in 1948 from Morehouse College ,second in the class that included Dr. Martin Luther King. He obtained an MA in journalism, 1958, and a Ph.D. in mass communications from the University of Wisconsin. From 1961-1971 Barrow worked in research departments in the advertising industry, eventually in 1968 becoming vice president and associate director of research for Foote, Cone and Belding Advertising Agency in New York. He served as dean of the School of Communications at Howard University from 1975-1985. In the summer of 1968, following the murder of his classmate, Martin Luther King, he urged AEJMC (then AEJ) to do whatever was necessary to end its lily white, virtually all male constituency in its own association and in the media to which it sends its graduates. This led to the establishment of the Ad Hoc Committee on Minority Education, which he chaired, and to a program to recruit, train and place an increasing number of minorities in our schools and departments and in the media. In 1970 he founded and became the acting head of the Minorities and Communication Division. In 1997, he received the AEJMC Presidential Award for his activities.

0 responses to “The Passing of Dr. Lionel C. Barrow Jr.”