WASHINGTON, D.C. – President Barack Obama signed the White House Initiative on Historically Black Colleges and Universities on February 26, acknowledging the importance of those institutions and the obstacles they currently face.

“HBCUs face tough challenges today,” Obama said to a room including about 60 HBCU presidents, Black lawmakers, students and media. “Endowments and state budgets are shrinking, too many facilities are deteriorating, enrollment is falling—and the cost of education keeps going up. And these schools feel the pain more acutely—they do more with less, and they enroll higher proportions of low- and middle-income students.”

Obama said the government will increase its funding for the nation’s HBCUs by $100 million in the fiscal year 2011 budget. He also pointed to the nearly $400 million in federal Pell Grants, many of which go to students attending Black institutions.

The survival of HBCUs is vital, the president said, to the goal of making America the world leader in college graduates by 2020. 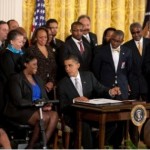 VSU made White House history by being the first Drumline to ever perform at the White House. The VSU Trojan Explosion band sent it’s drumline “Orange Thunder” to the White House to perform for President Obama during the signing of the HBCU Funding Bill.
Director Dr. Mark Phillips was on hand with his drum instructor Elisha Powell as the drumline did an exhibition performance for audience.
In the clip below you will see some of the students in the audience as the President acknowledges them and the University.