Rand Paul Comes to My Alma Mater: Thanks for Trying… 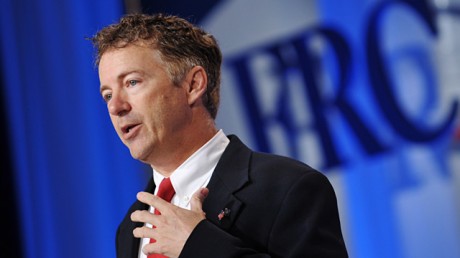 On the other hand, I have no problem accepting that my skepticism could be wrong, and that Senator Paul’s visit to The Mecca represents his genuine interest in bridge (re)-building.  He may truly want to be the President of everyone in the United States, rather than just of those who elect him.  (That’s what this is really all about, isn’t it?)

Either way, his visit was still politically clumsy.

Senator Paul’s best bet would have been to come to HU and have a town hall-style gathering with the students where he personally addressed and spoke with (not to or at) them.  Instead, he chose to lecture to students steeped in Black history, about Black history and the Republican Party.  Really, who comes to a room full of students, who attend Edward Brooke’s alma mater, who willingly showed up to hear a Tea Party Republican speak, and acts as if he’s spit a hot new verse, schooling them on Edward Brooke anyway!?  I mean, If nothing else, we remember him as the Brother from Barbara Walters’ “smashed the homie” claims on Oprah!  Paul’s fledgling attempts at ‘droppin’ Black knowledge’ aside, the biggest problem with his message was the sleight of hand he tried to pull in reframing the history and philosophy of the Republican Party.  Those of us who took history classes at Howard [history lesson]

know that the 1964 Republican National Convention was marked by Barry Goldwater’s olive branch to the John Birch Society and other bigoted forces, and the GOPs corresponding rejection of civil rights legislation.  But that was actually the second time they

abandoned Black people.  The first time the GOP abandoned the Black vote was shortly after the end of the Civil War, when despite being the party welcoming Black federal politicians, they traded us in primarily for the Rutheford B. Hayes Presidency, taking federal troops out of the South, [sports analogy] cash considerations, and a player to be named later [/sports analogy].  The removal of federal troops allowed the resurgence of the Ku Klux Klan in the land whose ousted first VP famously claimed that God-ordained inferiority of Black people was the Cornerstone upon which “their government” was built.  Local governments and elected officials allowed or even encouraged the lynching of Blacks who dared to organize, pursue education, or vote.  Add to that the promise of the New Deal Democrats, and you have at least a basic understanding of why Black Americans hold an understandably healthy and historical mistrust for local governments, and an admittedly too-healthy trust of the federal one [/history lesson].  So when Senator Paul comes to Howard and tries to tell the same old story about how the Republican Party is and always has been the Party for Black folks, it ends up like watching a dude stand in front of a room full of doctors

doing the “I’m pulling my thumb off” trick and REALLY wondering why they didn’t think his thumb came off.  What the Republican Party should be doing is inviting Black people into the discussion about the direction of their party, asking how Black people can contribute to the party’s vision, and having Black people help create specific plans for both changing and propagating a new platform that politically and socially welcomes us back into it.  That’s why I brought up the town meeting example… before I snapped and went off on my history rant.  Howard University students would be excellent for helping to craft such a Party if Republicans like Rand Paul are serious about courting us.

Or, they can continue to lecture to us in a paternalistic manner, keep pretending that there is no real historical basis
for Black people being almost 100% Democrats, and remain the party that treats us as if we just simply ain’t bright enough to see how the other one is pulling the woolover our eyes.  Like Eddie Murphy once said in regards to the Black vote, “We’re gonna get a foot up our ass, regardless”.  Count me and the rest of my fellow Bison as those who will, until there’s a better alternative, continue to vote for the one with the smallest shoe.  And Rand Paul came to Howard lookin’ a whole lot like that little old lady from the fairy tale…