Florida A&M University (FAMU) graduates Virgil A. Miller and Tasha Cole are both serving as the chiefs-of-staff for two political figures in Congress.

Miller, a Palm Beach, Fla. native, works for Rep. Cedric Richmond (D-New Orleans). He says his daily routine consists of briefing the Member on administrative matters, interacting with constituents, meeting with stakeholders and overseeing the overall direction of the office. 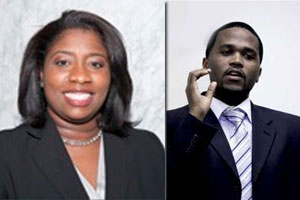 “I am responsible for keeping the trains running efficiently and on time in the office,” said Miller. “In order to achieve this, I work to ensure the congressman’s staff has the support and resources they need to be as productive as possible. I also assist in coordinating the Members’ political operations in my spare time.”

Miller, who served as Student Government Association (SGA) president, earned his bachelor’s degree in 2003 and master’s degree in 2005, both from FAMU. Prior legislative branch experience includes working for the House Committee on Energy and Commerce; the office of Rep. John D. Dingell (D-MI), the dean of the U.S. House of Representatives; and the office of Rep. Ed Towns (D-NY). The Florida Legislature was where he got his start in politics. While working on his master’s degree, he had the opportunity to intern with then-Rep. Curtis Richardson (D-FL).

“The formal education I received at FAMU, coupled with practical experience, provided a strong foundation to excel in the U.S. House of Representatives,” said Miller. “As FAMU students, we were expected to actively participate in the political process, effectively advocate for our positions on the issues, and speak out against injustices. Additionally, my experience as student body president and member of the FAMU Board of Trustees provided valuable experience with managing staff, being accountable to constituencies and directing the operations of a major organization.”

Keneshia Grant, who served as SGA vice president with Miller, described her friend as a great manager and visionary.
“He has been perfecting his leadership ability since his time on ‘the Hill,’” said Grant, a 2005 graduate. “Even before he served
in SGA, he was a leader in the A.M.E. church and a leader in the Marching “100.” I am certain that he will serve his member well and that the people of Rep. Richmond’s district in Louisiana will benefit tremendously from having Virgil on their team.”
Cole, who has worked in Washington DC since 2002, was appointed as chief of staff for Rep. Frederica Wilson (D-FL).

“I’ve been in D.C. for eight years,” she said. “There’s a hectic pace and you are in the middle of everything that is going on in the country. It can be very humbling when you can be a part of decisions on healthcare and tax reform.”

Cole, an Alabama native, was the senior advisor to former U.S. Rep. Kendrick B. Meek, where she worked since he was first elected to Congress. In 2008, Cole worked as the director of political affairs for the Democratic National Convention
Committee in Denver. Prior to moving to D.C., she worked in Florida organizing programs designed to advance progressive issues and elect moderate and progressive candidates to office. As an active and proven fundraiser, she has helped raise hundreds of thousands of dollars for various causes and candidates.

Cole began her political career as constituency outreach director for the Florida Democratic Party working on numerous statewide and local campaigns including the Gore/Lieberman Florida Campaign and Recount Effort in 2000 and as the early vote director for the Kerry/Edwards Campaign in Florida. She has also worked as the state director for the Service Employees International Union in Florida and served as a senior adviser for the Coalition to Reduce Class Size, a statewide ballot initiative to reduce class size that was approved by more than 2.5 million Florida voters on Election Day.

Cole graduated with honors from FAMU in 1993 with a degree in broadcast journalism and worked for several years as a documentary producer and television reporter for a statewide public affairs program and as a media relations consultant for non-profit organizations and associations.

Cole is the recipient of numerous honors, including an Emmy in public affairs for a PBS documentary on domestic violence centers, the Women In Communications Rising Star Award and the grand prize in the Florida Bar Media Awards Contest. She serves on the Board of Directors for Running Start, a non-profit committed to engaging young women in politics and is active with several community organizations including the D.C. Chapter of the FAMU Alumni Association.

“Virgil and I are good friends,” said Cole. “He is a little younger than me. We have the ‘Orange and Green’ connection.”

Cole adds that if there is anything she can do to bring people into the process, she will.

“There are still doors that need to be opened,” she said. “We’ve opened them on the state level. We still have work ahead of us.

For people interested in this field, they want to have a healthy balance between their personal and professional goals, be open to opportunities and to moving and keep up with the trends and happenings that are going on around the world. We are still leaders. The business is consuming, but the pace is amazing. All of my experiences have been great.”

Grant said FAMU has long been the wellspring of African-American politics in Florida.

“It should come as no surprise that our students go on to hold high-ranking positions, including elected positions,” she said. “I believe it is important that everyone realizes that FAMU is and has always been in the business of making leaders for our community.”