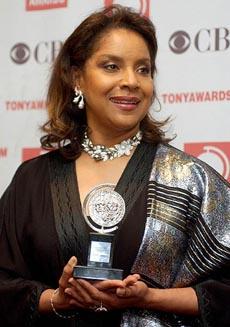 Phylicia Rashad made theatrical history. She received the prize for her portrayal of Lena Younger, the tough-minded matriarch in a revival of “A Raisin in the Sun.”

Rashad said in accepting the award: “Often I’ve wondered what does it take for this to happen.” And now I know. It takes effort and grace and in my life that grace has taken numerous forms. The first was the family into which I was born, parents who loved and wanted me, and a mother who fought fearlessly, courageously, consistently so that her children above all else could realize their full potential as human beings.”

But she discourages any soapboxing about winning Tonys or breaking a color barrier. “When the business of art becomes about winning awards, then art becomes something else,” she says. “Tony Awards are wonderful and we rejoice for people who receive them, but as an artist this is not the goal, and if it becomes the goal, we’ve taken another direction. That’s not what I trained in; that’s not who I am.”