“And Alpha is in my heart!”
Six words that took 15 seconds to say.

It is true: college days DO swiftly pass. April 5th marks the 10 year anniversary of my birth into the Beta Nu Chapter of Alpha Phi Alpha Fraternity, Inc. And while I share many of same experiences as Vince Adams, our stories are vastly different.

See, my mother is a Delta and my father is an Alpha. My first cousins are Deltas and Kappas, second cousins are AKA’s and a step-brother is an Alpha. I grew up going to Tuskegee and Alabama St. Homecomings…attedning the stepshows…jocking from afar. Though there was no familial pressure, undoubtedly I would cross one day. And one organization stood out from the rest.

See, I’ve always been big on reading about history and traditions. While reading the biographies of great African-American leaders as a child. I noticed a trend of “Alpha Phi Alpha” if many of the male leaders. Made perfect sense to me that if I wanted to be considered one of the “greats” then I should be an Alpha.

As a grew older, most of my father’s fraternity brothers always started out a conversation with “how are your grades?”. Never failed. Education was extremely important to them., and they cared enough to make sure I was on my way to greatness.

When I was a freshman in high school, my step-brother crossed at the University of South Alabama. I was immediately introduced to the rockstar side of fraternity college life. I loved it. Who wouldn’t? So my mind was made up. I pledge Alpha Phi Alpha when I got to college. Where I was going? Who knew.

Fast forward to Fall 1996. Then-President Humphries came to Mobile and awarded a group of students full scholarships to FAMU. I had never thought about FAMU before that day. Hell, I thought Tallahassee was a major city in Florida. One of my friends began to tell me about all of the pretty ladies and awesome parties at FAMU. Full ride + pretty ladies + awesome parties…the deal was sealed. I was going to FAMU, and I would be an Alpha. Life would be great.

In Spring 1997 during my lunch period, I got the news that couldn’t hit me harder…the Alphas had FAMU had been suspended…for 5 years. Freakin’ great. It felt like Mike Tyson had punched me in the stomach. I would never be a college brother. The Alphas would come back on the yard as I was leaving. Perfect timing.

7,000 or More, Coming To Adore, Yelling And Screaming Our Names

I’ve had some of the most unique experiences as any student that has become a member of the Divine Nine. We had, not one, but two sneak peeks. The first, during the huge Be Out Day Step Show, was epic. Unknown to us, the bruhs had baked our sneak peek into their show routine. We get a call, and were told to meet. I’m thinking simple Probate Show prep stuff. No biggie.

We get to the house, and a group of bruhs tell us about the sneak peak. Jaws drop. I can’t begin to describe how this felt. This was the realization of a lifelong dream.

We pile into several cars, arrive at campus, and are snuck into the back of the gym. About 1/3 of the way through the bruh’s show, my ace Damon calls “line!”, and we line up at the back of the gym. The crowd, packed to the rafters, goes absolutely crazy. I mean, it was like Jordan won Game 7 of the NBA Finals at the buzzer. We had some much adrenaline flowing through our veins, that we, literally, lifted Damon off of the ground while marching. Crazy. The look on the other organizations’ faces was priceless. Like “I know these mf’ers didn’t just sneak peak during the step show!” 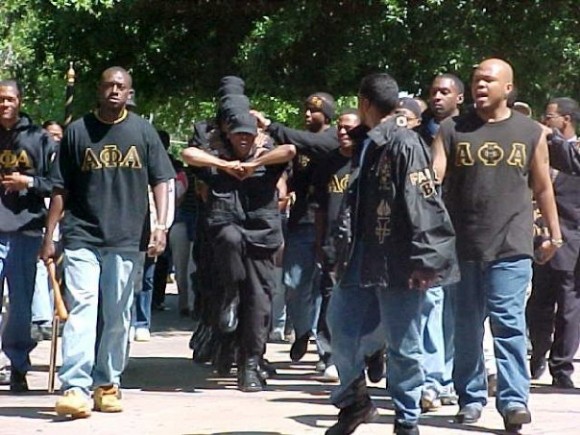 I often wonder what my life would be like if I never became Beta Nu. Would I have drifted into obscurity? Would I have crossed grad? Who would be my close friends? But that didn’t happen, and I enjoyed my time in the Chapter…maybe a little too much. It was in the Chapter that I learned to create flyers and plan for parties. (Side note: I loved parties mainly because my favorite part was flirting with women while passing out flyers.)

There have been downsides. There are plenty of people whom I never talked to/had little contact with since April 5th, 2000 (ok, actually earlier than that). And this sucks.

I admit, I lost myself a bit during my time in the Chapter. Between trying to “enjoy” my celebrity status, and trying to impress the older brothers by being “live”, I became someone that I really wasn’t. Yeah, I like to flirt (been trying to kiss girls since age 4), but there was really no reason to act the way I did. That’s not me.

I was so wrapped up in the frat that my grad school GPA dropped to 2.5 at times – a formula for program expulsion. This caused me to pull “otherworldly” semesters in which I got between 3.8 – 4.0. I should have been doing that all along.

As the founder of a consumer internet company since my last year of business school, my route has been non-traditional (to say the least). My journey through Beta Nu, or “life accelerated” we call it, as prepared me for some pretty intense situations – situations that would make most people fold. Using mental toughness, tenacity, and, yes, a little bit of arrogance, I’ve learned how to deal with almost anything.

More importantly, I have a relationship with a group of black men that will last until the day I take my last breath which is built upon a special group of principals. We’ve shared some of the highest of highs, and the lowest of lows. Men who will tear you down in a second, and build you back up the next. A diverse group of gentlemen whose influence spans the globe. I remember when Spring 1990 came back during my first Homecoming thinking that I have to, at least, achieve their success. We’re not talking about some chumps here. They were/are truly “agents of change” in their respective professions.

Throughout my ever-developing professional career, many of these guys have given/still are giving me chances that I probably don’t deserve…All under the name of Beta Nu.

Overall, it is an honor to be Beta Nu – a fraternity within the fraternity.


“…though the price was dear and the road was long, I wouldn’t have had it any other way…”