For more than a decade, the 80-game losing streak of Prairie View A&M’s football team ranked the Panthers among the worst college football teams of all time.

It wasn’t until 2009 that Prairie View A&M football started showing some success and the historically black college clinched its first SWAC Western Division championship in 45 years.

The conference title was a fitting tribute to Prairie View A&M’s legendary band director, George Edwards, who died in March 2009 after a car accident.

For much of Edwards’ 31 years at the school, the Marching Storm was the only reason to come out and see the football team.

“During the halftime of an HBCU game, people don’t go get hot dogs and cokes,” said William McQueen, who took over after his friend’s death. “You do that some other time. You want to be in the stands at halftime to see the show. Football people think fans come to football games to see football. With HBCU bands, we can have all bands and still fill up a stadium.”


When Edwards took over at Prairie View in 1978, the band had about 25 members. A member of Florida A&M’s famed “Marching 100,” Edwards had just finished his master’s degree at Michigan State, and he hired McQueen as his assistant.

“He was a senior during my freshman year at FAMU and he was very talented,” said McQueen. “As a student, he wrote for the marching band and that was not common during that time. We had about a 200-piece band, and of that number, only two students that I’m aware of wrote music for the band.”

During his tenure, Edwards built the band into one of the most critically acclaimed in the country, boasting 225 members.

“He certainly put this band program on the map,” said McQueen. “When you have a good product, then people want to be a part of it to the point where they take pride in participating in it and declaring that they’re a member of it.”

It played in President George W. Bush’s Inaugural Parade in Washington, D.C., in 2001, and was followed around and profiled by the BBC. It played at the opening of Houston’s Reliant Stadium, and the band’s drum line, “The Box,” and its dancers, “The Black Foxes,” performed with Beyonce during the 2004 Dallas Cowboys’ Thanksgiving Day game.

In January 2009, five months before his death, Edwards realized one of his lifelong goals as the “Storm” marched in the 120th Tournament of Roses Parade in Pasadena, Calif. Prairie View was the first band from a historically black college to perform in the Rose Bowl Parade.

“When it came to halftime and we actually had to bow down to pay tribute to him, that brought tears because we saw his picture on the screen and it was like, ‘Wow, this is the first performance we have without him,’” said Dotson of the game at Reliant Stadium against Texas Southern, a qualifier for the 2010 Battle of the Bands. “We were actually taking a step forward to continue without him.”

The Panthers paid their final tribute to Edwards during last fall’s homecoming game versus Alabama State on Oct. 11, including a rendition of R. Kelly’s “I Believe I Can Fly,” accompanied by the release of 35 doves. 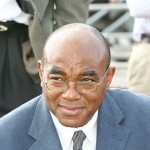