Director: Sanaa Hamri
Writer: Michael Elliott
Cast: Queen Latifah, Common, Paula Patton, Phylicia Rashad, Pam Grier, James Pickens Jr, Mehcad Brooks, Michael Landes, Dwyane Wade, Dwight Howard, Bobby Simmons.
Plot: Leslie Wright (Queen Latifah) is a straight-shooting physical therapist who gets the gig of a lifetime working with NBA All-Star Scott McKnight (Common). All is going well until Leslie finds herself falling for Scott, forcing her to choose between the gig and the tug-of-war inside her heart. Oblivious to her romantic overtures, McKnight is instead drawn to the affections of Leslie’s childhood friend Morgan (Paula Patton), who has her sights set on being an NBA trophy wife. Is Leslie destined to play the role of “best friend” forever or will Scott finally see that what he always wanted is right in front of him?

Pros: The biggest Pro is that the roles of event the smallest parts were filled with authentic people. Dwight Howard plays Dwight Howard. Stuart Scott plays Stuart Scott, and so on. Phylicia Rashad and Pam Grier play the mothers on either side. That’s dope.

Cons: Not many. If you can get over the fact that movies today are either formulaic or remakes you’re fine.

Overall: Just Wright is a fun love story. The feel is reminiscent of “Brown Sugar” (also written by Elliott) but is a marked improvement. The role will push Common into more leading man roles, and Latifah is showing her influence in Hollywood. Kudos all the way around. This one is to be supported in the theater. 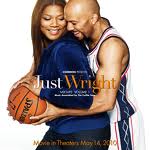