Director: Nancy Meyers
Writer: Nancy Meyers
Cast: Meryl Streep, Steve Martin, Alec Baldwin, John Krasinski, Lake Bell
Synopsis: Jane (Streep) is the mother of three grown kids, owns a thriving Santa Barbara bakery and has–after a decade of divorce–an amicable relationship with her ex-husband, attorney Jake (Baldwin). But when Jane and Jake find themselves out of town for their son’s college graduation, things start to get complicated. An innocent meal together turns into the unimaginable–an affair. With Jake remarried to the much younger Agness (Lake Bell), Jane is now, of all things, the other woman.

Caught in the middle of their renewed romance is Adam (Steve Martin), an architect hired to remodel Jane’s kitchen. Healing from a divorce of his own, Adam starts to fall for Jane, but soon realizes he’s become part of a love triangle.

Should Jane and Jake move on with their lives, or is love truly lovelier the second time around? It’s…complicated.

Pros: Funny! There were several LOL moments. Alec Baldwin has made for himself a hilarious 2nd career out of making fun at many of the serious character types he played in his first. Characters such as 30 Rock’s Jack Donaghy, Stan Indursky in Ben Stiller’s Along Came Polly, and several appearances of SNL prove the point. Add this character to the list. Steve Martin is also at his funniest in years (Pink Panther????). Beautiful locations. 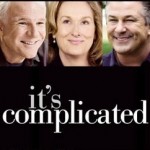